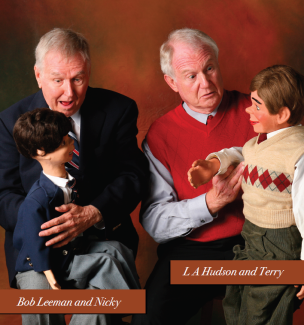 Nicky: First off, let’s get the terms straight. If you call me a dummy, I’ll sock ya, I’ll mow ya down.

Terry: Yeah, we’ll mow ya down.

Bob: Now that’s not very nice Nicky. Where did you pick up that “mow ya down” stuff?

Terry: Yeah, he said it all the time.

L A: Now wait a minute boys, we’re supposed to be talking about ventriloquism, not doing old jokes. So why don’t you two boys just sit quietly and let Bob and me talk?

Terry: The only old jokes around here are you two geezers, but I guess if you don’t want us to talk, we won’t.

Nicky: Yeah, we really don’t have much to say about it, do we?

Bob: No, you don’t, so just listen, and you might learn something. You know, L.A., when I started, there wasn’t any television, just radio, and Edgar Bergen and Charlie McCarthy were a big thing. The show business thing sort of came natural for me. I didn’t set out to do it, it just happened. I guess I wanted to amaze the kids in the neighborhood.

L A: Edgar Bergen was my inspiration also. I guess he was for a lot of ventriloquists. Some people said that he moved his lips too much, but he didn’t start that until he started radio.

Bob: And since we couldn’t see him, we didn’t know it.

Bob: Actually, I liked Mortimer Snerd as much as Charlie. He was the goofy one.

L A: I think everybody liked Mortimer Snerd.

Bob: And he had a woman character too. She was an old maid.

Bob: Don’t interrupt, Nicky. It’s not polite. She was a typical old maid, and she did those kinds of jokes. Bergen would ask her, “Have you ever had a man’s arms around you?” and she would say (in a high, fluttery voice), “Once, when the bus turned over.” I think her name was Penelope something; is that right?

Terry: Boy, you two don’t remember much do you? Her name was Effie Clinker. Your heads must the thicker than mine or Nicky’s.

Bob: Effie Clinker, that’s right, but she never was as famous as Charlie and Mortimer. Did Bergen have any other characters?

L A: He may have, but I don’t remember. It was mainly those three. In some of the Charlie McCarthy movies, they used a midget in long shots, so it looked like Charlie was walking around. But I didn’t like that very much.

Bob: I didn’t either; I wish they hadn’t done it. It looked odd.

Nicky: You’re a fine one to talk about odd. You’re 80 years old and still playing with dolls.

Bob: Edgar Bergen had two main faults—he moved his lips too much, and he couldn’t separate his expressions from Charlie’s. When Charlie McCarthy was pained, Bergen looked pained. He didn’t hold the illusion of being separate from the figure very well. I always wondered why they didn’t cover up that and the lips moving better in the movies. Still he did great voices. He had that down pat.

L A: My next biggest influence, someone who really influenced me, was Paul Winchell. He was on television with Jerry Mahoney and Knucklehead Smith. He did a lot more with the figures. Some of the things were just absolutely amazing. He would have someone behind the figure, and while Winchell worked the head and did the voice, the other person would move the arms and body. One of the assistants was a dancer, and he would provide the legs for Jerry and you would see him dance. He didn’t get up and waltz around of course; it was all sitting down.

Bob: The most famous woman ventriloquist was probably Shari Lewis. She was the first person I ever saw dance with a full-size figure, one that was as big as she was. Of course she had more than one figure. Most of her figures were sock puppets. I don’t recall their names.

Nicky: Lamb Chop, Charlie Horse, and Hush Puppy. It’s a good thing I’m not a sock puppet, or I’d have to sock you.

Bob: I never really wanted to do a show with a lot of figures, so I stick mostly with Nicky, and I also do impressions. Nicky has a lot of friends. I know one lady who has seen my show, and she will come up to me and ask, “How’s Nicky? Tell him I said hello.” I think that’s what happens when you concentrate on one figure.

Nicky: I didn’t know you felt that way. I’m speechless.

L A: I take the other route. I’ll always work with Terry; he’s been with me the longest, but I’ve also got some newer figures—a vulture named Vic D. Mize, a hillbilly named Zeke, a skunk named Chanel, a dog named Happy, a crow named Heidi and a chimp named Coconut.

Terry: See what I have to put up with, Nicky? You ought to be glad you’ve got a room of your own. I live in a menagerie.

Nicky: Actually, I live in a suitcase.

L A: I go to the ventriloquist convention each year, and I learn a lot from the newer performers coming on the scene. I buy the DVDs and try to get ideas from what they do. And another thing, I like meeting and talking with other ventriloquists.

Bob: L A and I have been doing this for a long time, so most of what we are going to pick up is in the line of material. The techniques of how we do what we do haven’t changed much. I don’t even practice technique much any more, although when I do, I work in front of a mirror. I’ve also video taped myself and gone back and watched that. You can see a lot of things when you’re watching a video. Of course you have to watch it over and over.

Nicky: You would think hearing some of your jokes once would be punishment enough.

L A: There is more to ventriloquism than just the voice and trying to see that your lips don’t move much. The performance is about timing and the movement of the figure. If the figure reacts the right way, the audience will watch him and not you, and so they won’t notice if your lips move.

Bob: The ultimate compliment would be if someone asked, “Did you notice him moving his lips,” and the other person said, “Oh, I was so busy watching the character, I wasn’t paying attention to the other guy.”

L A: That’s what happens when you make the figure react to what’s going on. I found working with the puppets, rather than the traditional ventriloquist figure, to be very liberating. I find I can get more attitude with the puppets, that is, make it move.

Bob: Nicky is a very traditional “hard” figure; nothing moves except his mouth, but if you turn his head just right, there is an illusion that his eyes are moving, even though they’re not. Some hard figures had the eyes painted so they were turned just a little.

L A: There are also techniques you have to learn to pronounce the labial sounds such as b, m, p, q, v, and w that usually have lip movement. The ventriloquist learns how to make the sounds with substitutes, or sounds that will be very close to what the audience expects to hear. Really, ventriloquism is like magic; there is a lot of illusion involved.

Bob: Some of the most famous bits, like drinking the glass of water while the figure talks—that’s an illusion. It’s a trick glass.

Nicky: A trick glass! Why you old fraud. And all the time I thought you were really doing it.

L A: I bought one of those glasses once, but I’ve never used it.

Terry: Well I hope not. Why don’t you have me talk while you drink a bottle of beer?

This interview was transcribed, more or less, by Edward Southerland who did his best to keep accurate track of the dialogue.