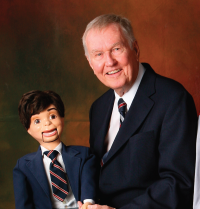 This appeared in the Winter 2007 issue of Texoma Living!.

“My mother was the manager at Duke & Ayers Five and Dime on the square, and one day I was in the store and saw this little dummy, sort of like Charlie McCarthy. Well, I had to have him, and sure enough, he was under the tree at Christmas. I don’t know why, but I named him Nicky.”

When Leeman got bigger, he got a bigger Nicky and a bigger audience. By the time he was a sophomore at Bonham High School, he had earned a regular Saturday spot on Dallas TV.

Uncle Sam was Leeman’s first calling after high school, but World War II had just ended, so his stay in the Army Air Force was short. Back home in Bonham, Leeman reached out to the radio connections from his high school days. The result was a children’s TV show on the fledgling operation at WFAA-TV, Channel 8, in Dallas. The show was “Nicky’s Tree House,” and it starred Leeman and his wooden sidekick. “Bonham couldn’t get the TV signal back then, so my parents would drive to McKinney and watch it at a relative’s house.”

During high school summers, he often worked as an advertising artist and window dresser at Hunt’s Department Store in Bonham. This led to similar jobs in Dallas, and while he was spending his Saturdays at the Tree House, his day job was at the legendary Dallas department store Titche-Goettinger.

In the sixties, he worked in local radio and TV in Monahans, Texas. “I did a music show on radio and on TV hosted a midnight horror show as Mad Luther, with a Boris Karloff accent.”

The couple moved to the Los Angeles area to try things on a bigger stage. Polishing his stand up act of impressions and jokes, he played the small-time comedy clubs while working in the art department of a magazine, then a newspaper.

He also worked in the movies, did a TV pilot. Bob and Rachell came back to Texas when he retired in 1994. Bob stays busy painting, and he and Nicky perform regularly for church groups and schools. “Sometimes I wonder why so many things didn’t turn out the way I wanted. Then I realize how so much has worked out so well, and I know the Lord’s been taking care of me just fine.”

Even as a child,” said Jodi Castelli, “I saw the potential of discarded goods. I often rescued empty cereal boxes and other items doomed to the trashcan.” Today, the artist has graduated from the trashcan and instead combs antique shops to find vintage postcards, advertising, photographs, buttons, even game pieces, to serve as focal points in the visual stories she creates.