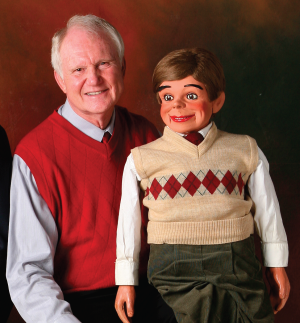 L A (that’s all, just L and A, the letters don’t stand for anything else) Hudson’s father was a successful merchant in Colgate, Oklahoma, who longed to be a show business impresario. “He was a public speaker, and he promoted entertainment to advertise the store,” said Hudson. “He’d hire a Western band to play in the store display window on Saturdays and later on, he sponsored a show on KADA in Ada.

When Arvard Hudson saw a ventriloquist perform before a group in Okemah, he went home and asked his son if he would like to learn the art of throwing his voice. “He knew I was a sort of a ham, and when I said yes, Dad took me over to see the fellow in Okemah.”

That led to a mail-order course and his first partner, a copy of Paul Winchell’s sidekick, Jerry Mahoney. “Much of ventriloquism is self-learned,” said Hudson. “My problem was I didn’t have anyone to ask questions of.”

But young Hudson kept at it, and after a year or so, he started performing locally. In 1954, when KTEN-TV cranked up in Texoma, he got a chance for a bigger audience. “They had a kid talent show, and tåhe first town represented was Colgate, and I was on the very first show.”

Not only was Hudson invited to become a regular, he also got a new partner, a full size (for a dummy that is), more expressive figure he named Terry Smart. “I also started doing shows for local clubs, and later on, when the store sponsored the “Hudson Brothers’ Talent Show” for the store, I was one of the emcees. I was lucky my dad just loved show business.”

When he went off to college at Phillips University in Enid, Oklahoma, he studied music, opera no less, and performed for five seasons with the school’s opera program. No, Terry never got around to Tosca, but Hudson stayed with ventriloquism all through school, and Terry even went along with Hudson when he did a hitch in the Air National Guard.

The pair went back to school when they got out of the Air Force, and Hudson became a teacher. He was in Denison for a few years and then in Sherman. He added counseling to his resume following an internship at Southeastern Oklahoma University.

If anything, Hudson is more involved with ventriloquism than ever before. Seven new figures have joined Terry Smart, so Hudson has kept his tonsils working overtime coming up with voices for a female French skunk, a dim-witted vulture, a crow, and the rest of the crew. He also attends the ventriloquist’s ConVENTion in Vent Haven, Kentucky, each year. The gathering has hundreds of performers and thousands of voices and is guaranteed to leave visitors wondering, “Who said that?”

Judges at bodybuilding competitions look for models with the most symmetry in their physique, for physical size, and for the least amount of body fat. To stay lean, Teamann diets for eight weeks prior to competitions, noting that, “It takes years to perfect the right diet for competitions.”