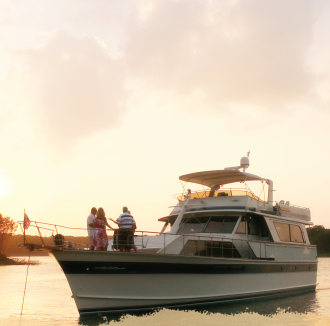 © This article first appeared in the August 2010 issue of Texoma Living! Magazine.
Photographed by Anne-Marie Shumate for Lasting Images Photography.

Aboard the Yacht Naughti Girl

Sometimes it is interesting to deconstruct an idea and trace how it came to be. The dinner party afloat featured in the following pages started out a long way from the tranquility of a sleepy cove on Lake Texoma. It began in early May as an idea for a party at a yet to be found Victorian manse.

“Let’s do a formal dinner in a vintage setting for September,” was the opening shot.

“Better than that, how about a ‘50s cocktail party—a ‘Mad Men’ cocktail party,” referring to the popular television series set in the world of Madison Avenue in the late ‘50s early ‘60s. “Maybe we could do it at the Barrett Apartment in Denison.” Now we’re really on a roll, so Mad Men at the Barrett it was, but…. But that didn’t work out.

A couple of days later: “I still like the formal cocktail party idea, so how about we find a place to do that?”

“How about at a really modern house—Mid Century Modern that is—something like Philip Johnson would have done, with a lot of glass?”

“I know of one sort of like that on the lake, very open, really classy.” Done and done.

We found the location, and we found a willing hostess—willing that is to let us bring forty strangers into her house for a cocktail party shoot. We lined up a photographer, we lined up a date, we lined up a caterer to do the food, but…. There always seems to be one but somewhere in the equation.

“We are overreaching. We can never pull this off. We can’t manage that many people. It will never look like what we think it will look like. Our reach is exceeding our grasp—or is it the other way around?”

“How about if we went back to the formal dinner party idea? We could have eight people and an elegant menu and….”

“Eight is too many. Why not just six? And we can do a feature on the house for the style section.”

“Okay, six it is for a formal dinner party—soup to nuts in tuxedoes—the guests, not the nuts.” But….

A few days later: “The home owners are okay with the dinner idea, but they don’t want to shoot the house this early in the summer. It’s not green enough. Besides, they’re leaving the country in a couple of weeks, and there’s just not enough time.”

By this time, the original idea for the summer issue, which was to have a Western theme, had been canned, so we were scrambling for a summer idea. (FYI, the Western idea is back on for September.) Summer—lake—boat—big boat—biggest boat we can find—dinner party on a boat. Anchors aweigh. But….

But this time it did work. We found the boat, we found the guests, we found the sea cooks and we set sail, figuratively speaking, of course, with a menu far distant from the bully beef, ship’s biscuits, and boiled peas that made up the old time sailor’s meager fare.

A lifeguard’s work is never done. What does it take to keep your cool at the pool? TLM caught up with two local lifeguards, a rookie and an eight-year veteran, to find the ins and outs of this traditional summer job. Sara Bilyeu, the rookie, is sixteen and a Sherman High School junior. She is a member of the SHS varsity swim team.

When Jason and Daresa Sofey purchased the former W.S. Dorset family estate on Sherman’s North Preston Drive, they were committed to bringing the 1939 residence back to its former glory, and then some, but the project would have to be a rehabilitation, rather than a restoration.