The Art and Coffee Club which meets each Sunday morning at 9 at Panera Bread in the Sherman Town Center, is perking right along.  Founder Steve Black is working on several projects with his GCC art students and the group has new Web site–well new if you haven’t see it–and are involved in a number of projects. Catch them the Denison Fall Festival and possibly putting forth some public art before year’s end. Plaster casting experiments are currently happening in the studio in hopes of creating full-scale plaster figures in the style of artist George Segal.  Coffee clubbers were kind enough to smuggle out a photo of Black working on the process. 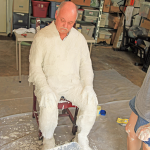 Texas has provided good hunting for scientists looking for traces of the past. The Alibates Flint Quarries along the Canadian River in Moore and Potter Counties in the Panhandle represent some of the most important bodies of evidence as to the industry of ancient peoples. For ten thousand years, men mined the rainbow-colored flint in the dolomite outcropping of the Permian Age.