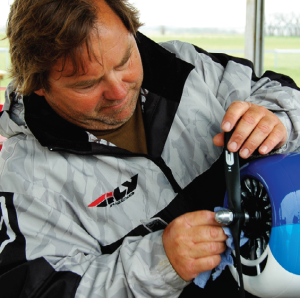 Story and Photos by Jonathan Cannon

As pilot Bruce Lemoine brought his Japanese Zero in for a landing, everyone watched anxiously. The war birds have a tendency to tip over on the propeller, fellow pilot Dan Eshelman said as the plane closed on the runway. Lemoine lined up his plane for a landing on the grass next to the runway to soften the blow to the prop in case the WWII bird tipped, but the extra precautions were unnecessary. Lemoine’s plane came to rest safely next to the runway. He shut off the engine, walked over to the plane and carried it back to the staging area.

Lemoine is a member of the Texoma RC Modelers Club whose 65 members get together at the eight acre Pete Darter Field between Sherman and Whitesboro to fly when the weather is good enough. “You can pretend you were a World War II ace,” said Tony Stephens. Or a bomber pilot or a stunt flyer or an air racer or even a helicopter pilot if you want too.

The club welcomes a wide range of people and planes. Members range from teenagers to guys old enough to have flown full size versions of the models, but that doesn’t mean an experienced pilot of full-size aircraft can successfully fly a model on the first try — or even the second or third try. “The average flight time for a [licensed pilot without experience flying models] is 12-17 seconds,” one member said. In addition to different ages, club members also come from all kinds of backgrounds. Stephens is a retired physicist whose name trails a string of degrees and several of the other members are physicians.

The club’s airfield is home base for just about every type of plane, from battery-powered foam models to planes that run on a fuel similar to that used by drag racers. Some planes can hit 80 miles per hour during a level flight and 100 miles per hour in a dive.

A 100-mile per hour dive is not something any of the club members recommends, however. In addition to putting enormous stress on the aircraft, such speeds can cause pilots to lose control, and even though the model planes are relatively small and light, they can still cause damage, as the dings in the metal roof over the staging area attest.

The planes’ engines can run as large as 150 cubic centimeters; some are even converted chain saw and grass trimmer motors. Some engines can support wingspans up to 14 feet. These larger planes are usually highly detailed and accurate scale models and are quite expensive.

However, it doesn’t take much to get involved in RC flying, and beginners can get all the equipment they need to start for around $250. The money will end up as a pile of sticks if the novice pilots don’t get some good instruction. Club President Dan Eshelman said practicing on computer flight simulators is a good way to start, and the veteran fliers of the club are always ready to take a fledgling under their wing. The club offers training for those interested in learning.

“[Flying the RC planes] is difficult but possible and gives you a good feeling of accomplishment,” Stephens said.

If you want to learn to fly, come join the Texoma RC Club. If you just want to watch, you are always welcome.