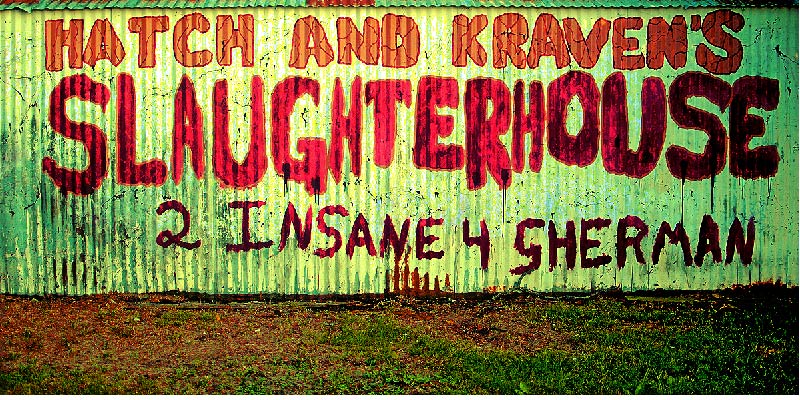 The story was published in the October 2010 issue of Texoma Living! Magazine.

Closed since 1980, the plant is now the annual Halloween home of Hatch and Kraven’s Slaughterhouse, which uses the building’s bloody past and unused equipment as inspiration for a half-hour tour of terror. Father and son owners Barry and Brad Travis, along with their extended family and friends, happened into both the business of haunted houses and the opportunity to start their own, and are constantly looking for new ways to terrify their guests.

Hatch and Kraven Modair are the fictitious brothers whose slaughterhouse exploits are the backstory for the theme of the Travis’s haunted house. It all began eight years ago when Barry Travis was living in Allen, Texas and looking for a new job. “One of Brad’s friends was a mechanic at something called the Monster Safari­− the concept was you put people in trailers and they shot paintballs at monsters,” Barry recalled.

The Travises worked at the safari for the next two years, under the direction of creator Allen Hopps, now the creative director of Screams, the largest haunt show in Texas. “He’s considered one of the best in the business nationwide, and he took Bradley under his wing,” Barry said. “He trained me in sculpting masks and props, and creating characters,“ Brad said.

The family came to Sherman after Barry married his wife, Christie Packer. “Basically, they got their tools at other haunts, they got their training, they learned everything,” Christie said. “When we got married, I was here and I was established. Our youngest, Mason, had gotten into Boy Scouts, and was friends with Chase Anderson.”

Chase’s dad, Jarod Anderson, was a descendant of the Anderson Meat Company founders, and when he and Barry got to talking about haunted houses at a campout things started cooking. It really took off when Jarod invited Travis to tour the old building.

“When we walked through the slaughterhouse, our imaginations were just running wild.” Barry said. “By the time we left, Brad had already come up with a story about two brothers that eventually turned into our storyline.”

“This is a family affair,” Barry said, “Mason’s one of our actors, and our daughter Ashli is too.” Family friends have been a constant help along the way.

“We went into debt when we started up, and our friends have helped us out several times, whether it be with our security, ticket booth, or acting,” Barry said. “We get people by word of mouth, just people who know people. The crew is like family to us. They’re always here helping us, they’re always around.” The spookhouse utilizes much of the original equipment from the old factory as its decorations. Meat hooks and racks still hang in the passageways, although the kill floor has been cemented over and converted into a mock “boiler room.”

Mazes occupy the area in which cattle were herded through chutes into the house, and “Hatch’s workshop” is on top of the former water troughs. A good haunt show has a theatrical core. “We have a storyline, we keep to it,” Barry said. “We’re a 1930s slaughterhouse that ran out of meat, the brothers went crazy, all the rooms and characters we have are based off that.” The characters spawned from the mind of Brad, literally harvested from his nightmares. “He does it like Stephen King, he dreams them,” Barry said, with a chuckle.

“Part of what makes us unique is that Brad makes all our own masks,” Christie said.

And making a mask is quite a process, as Brad explained. “There’s multiple ways of doing it depending on what you want to do. It can take twelve to eighteen hours to make a basic mask. The first year, I made eighteen masks. I make some different masks every year, and this year I’ve made eight new ones.” The family also makes all of their own props, and scavenge much of their set decorations and props from around the area.

“We’ll find something on the side of the road and bring it up here, clean it up and repair it,” said Barry. The show hires an average of forty-five actors every season, and the show is known throughout Texas for the high quality of the acting. “We’re an old-fashioned haunt, we’re actor driven,” Barry said.

“Our show is kind of a play area for the actors, and we have a lot of fun with it. Timing and emotion from the actors are more important than gore or special effects when you want to get a scare out of people. We train our actors pretty far in advance.”

The family lives just down Taylor Street from the slaughterhouse. “We live two blocks away, which is awesome,” Barry said. “Our friends have started calling us ‘The Addams Family of Sherman.’ They’ve got a point.”

Hatch & Kraven’s Haunted House in Sherman is one of the top-rated houses of horror in the state.

Battle of the Big Boxers

Bill Douglass, whose fifteen-store Lone Star chain has been the cutting edge of the convenience business for more than a decade, making Sherman, Texas a world leader in mini-mart innovation.