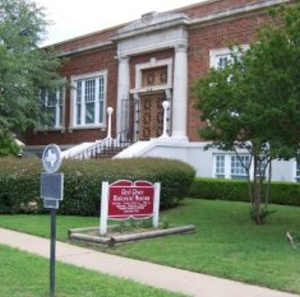 Editor’s Note: In the spring of 2011 the museum changed its name. It is now the Sherman Museum and Ms. Rolbiecki has retired and the new director is Dan Steelman.

Every old house had an attic.

There are almost 10,000 pictures, many of which are not identified. There are mystery objects too, but Marcia Rolbiecki, the museum director, says they are no longer accepting things that can not be authenticated and identified. At some point, with 50,000 items in the collection, you’ve got to get at least a bit selective.

The building that houses the museum is a piece of history in its own right. It was built in 1915 to house Sherman’s Andrew Carnegie Public Library, a duty it performed with dignity for a half century.

There are permanent exhibits and others that change regularly, so a trip the museum should not be a once and a while thing. There’s a recreated general store in the basement, and murals done by artists for the WPA on the walls. And if you are doing research, the museum can point you in some interesting directions there also. The museum is open Tuesday though Saturday, and you’re sure to get a welcome when you walk in the door.

The Red River Historical Museum has been collecting history for 30 years, but only recently, with a more active and energetic board, help from the city of Sherman and Marcia Rolbiecki’s drive to make the operation worthy of its mission, has it taken on the mantle of some thing special. Not bad for an attic full of old stuff.