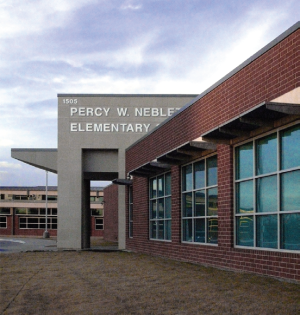 From the approaching drive off Gallagher Drive in Sherman, the complex looks like a series of pavilions linked one after another, each standing proud. Its elaborate composition may not be instantly meaningful to the passer-by, but upon touring the building one gains an understanding that this school, unlike many of its predecessors, has lofty intentions. While schools of the past drew their forms from classical details, and schools of our more recent past boast low-slung classroom wings with little architectural articulation and few windows, the new generation of schools makes natural light, views to the exterior and generous open spaces its inspiration.

Neblett Elementary is part of a building campaign that includes two other schools, Sory Elementary and Washington Elementary.

SHW Group of Plano, an architectural firm specializing in design of educational facilities, is the designer of the projects, and all three schools boast similar design elements. “Our goal for Neblett Elementary was to provide natural daylight evenly throughout classrooms,” explained Terry Hoyle of SHW Group, Principal in Charge of the project. “In our studies on day lighting, we have experimented with clerestories and windows to gauge how the students and teachers respond to the environment. We found that while distributing daylight evenly with clerestories is important, direct views outside through windows connect the building’s users to the natural world, which fosters a more comfortable feeling that better enables learning and teaching.”

Classrooms and offices that face north have walls of glass as well as interior light wells of high clerestory windows that bring light deep into each room. Louvered awnings project over south-facing windows to filter Texas’ harsh south light, while a reflective light shelf mounted on the interior reflects indirect natural light off the ceiling. To insure light levels are optimal in the classrooms with changing exterior conditions, photocell sensors detect the varying levels of natural light and adjust the output of artificial light. In addition to classrooms and offices, corridors and public areas also utilize natural light. “Higher test scores and fewer absences are direct results,” Hoyle said, “plus school districts are able to be better stewards of taxpayer dollars. Because of reduced electrical demands, long-term operational expenses are lowered. The goal is to reduce the total cost of ownership so that the district can invest more in instructional needs, such as teachers, technology and textbooks.”

“Many of our teachers choose to leave their lights off all the time. In fact, in my room I choose to leave the lights off because the natural light is so calming,” reflected Dr. Sheryl Barnett, Principal of Washington Elementary. All the faculty and students are excited and illuminated by their new environment. The Neblett School offers clear lessons in environmental stewardship while lending quiet support to the daily bustle of school life.

Editor’s Note: A clerestory (pronounced clear story) is a high wall with a band of narrow windows along the very top. The clerestory wall usually rises above adjoining roofs. Originally, the word clerestory referred to the upper level of a church or cathedral.