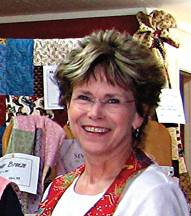 The former banker is making a name for herself in a new industry—quilt making. Her Main Street downtown Whitesboro retail store, Kaleidoscope, is housed in a 19th-century brick building, selling quilting fabric, patterns and notions. Quilt Sampler magazine is one of the leading publications for enthusiasts and Sluder’s shop is featured in the latest issue as one of the nation’s Top 10 stores.

Sluder and husband, Danny, bought the narrow 2-story building and have since filled it with nearly two-thousand bolts of fabric. “I buy what I personally like,” says Sluder, which accounts for a true kaleidoscope of colors, shapes and textures. A second floor classroom is dedicated to teaching the fine arts of planning and assembling.

Think sorority and the immediate image is a college campus, Greek letters over the entrance of a white columned house, and young women off to the prom. That may be the image, but it is not necessarily the reality.