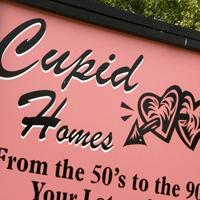 Since 2004, developers Ron Barton and Becky Lund have been building small homes. But it may be where these homes are built that has made Cupid Homes, the duo’s home building and home sales company, a surprise success. Instead of subdivisions dotting the outskirts of town, Barton and Lund have focused on urban areas in Sherman and Denison with their downsized domains.

Their customers come in all types, from young people just starting out to the elderly, from empty-nesters who are downsizing to blue-collar workers with steady jobs, but not quite enough income to support a home in the more expensive suburban developments. Whatever the reason for looking inward to the community’s older neighborhoods, Cupid buyers do not have to settle for less. Instead of skimping on quality features to bring the price down, Cupid uses a low-pricing system, which keeps contractors competitive. Using this approach, Cupid has built about 150 houses in urban areas such as East Sherman in the last five years.

Barton and Lund met in 1998, when she tried to sell him advertising, which he did not buy. It was the beginning of a great friendship, and after more than a year of being friends, the two took the leap to make their relationship a romantic one. When they decided that they would go into business together in 2003, they started with a color—hot pink.

Barton had used the color in previous marketing campaigns, and he knew that it stood out and caught people’s eye. Because of their romance, the name Cupid followed naturally. “Since we did this together, we had to come up a name that fit pink. We had the love story to go with it, and Cupid it was,” Lund said. Cupid Homes was incorporated in early 2004, and just like the pink color, the name has worked well. “People ask why we named the company Cupid,” Barton said. “And I answer, ‘Because you remembered it.’” The “Think Pink” theme extends beyond just a sign. In the office, pink name tags and business cards are part of Cupid’s MO. Barton even wears a pink name tag, and the trash can is wrapped with shiny pink paper. They like pink.

Barton was a fourth-generation builder, with knowledge handed down from fathers to sons, and Lund had considerable experience in sales. Still, Cupid’s beginning was a learning experience. With a “nothing’s gonna stop us attitude,” Barton and Lund beat the odds and made a name for Cupid with their small homes.

Style on a Budget

What Cupid has put out there are new homes that are full of nice touches usually seen only in higher-priced homes, such as rounded corners on the walls, custom cabinets with hidden hinges, beveled-edge countertops, moldings, six-panel interior doors, and neutral two-tone paint schemes on the walls—all standard in a Cupid Home. Most of the houses have three bedrooms and two baths in their 1,100 to 1,200 square feet floor plan.

Cupid builds energy-efficient houses for the sake of “going green,” but Barton sees another angle to that choice. “Everything is geared toward energy efficiency, because the monthly bill that comes in from the electric company or the gas company or the water company is all part of the house,” Barton said. “If you build a house that’s seventy or eighty thousand dollars, you’ve got to have your utilities coming in low too.”
A Cupid Home starts with a technology that has been proven for fifty years—Hardie board cement siding. To that, add thirty-year shingles, maxed-out insulation, radiant barrier house wrap, energy efficient heat and air systems, and low-E windows. The company will use brick or other exterior material, even build a garage if a customer wants it, and they will change floor plans to meet customers’ needs. All homes have a ten-year warranty.

The 2009 Parade of Homes held in May awarded the Cupid Homes entry at 1610 S. Montgomery in Sherman the “Judges’ Choice of Excellence Award for Outstanding Performance under $250,000. “They were amazed at the quality in a $70,000 house,” Barton said, adding that the Parade of Homes brought many people in to see a Cupid home who might not have seen one otherwise.
Equally important with what is inside a Cupid Home may be what happens outside in the neighborhood, where having a nice home has created a sense of community pride. Not only do the customers keep their yards up, but neighbors in older homes have begun cleaning up also. “It’s a pride thing. It’s contagious,” Lund said.

Throckmorton Street resident Christy Franklin understands. “Everybody keeps their homes’ appearance up,” she said. “We’re very much an old-style neighborhood where everyone waves at each other, everyone says ‘Hi’ or helps you carry in your groceries. They’ll say, ‘Hey, your flowers are looking good’ or compliment something about your yard.” Franklin said that she feels blessed to be where she is, in a culturally mixed neighborhood, where everyone respects boundaries and children feel safe. “They’re looking out for you, and you’re looking out for them,” she said. The laughter of children playing has eased Franklin’s missing her grandchildren in Florida.

Barton and Lund’s enthusiasm for their homes is catching. They truly see what they do as more than just building a house. They work with customers who do not have good credit to improve their scores. They help them obtain loans. They see that clean neighborhoods and helping people envision something better  touches other generations by helping children grow up in a clean environment. “It’s making better citizens,” Lund said. “I’d love to see every house on the east side new. That would tickle me to death. Keep in mind I have rose-colored glasses and would like to see the houses as a symbol of a better world.”

Barton said Cupid’s mission is not intended for historic areas of towns, but for those areas found in most cities where the houses have fallen into disrepair, where brush and weeds have taken over lots. “Every little town has an area that needs to be redone,” Barton said. “We’re not afraid to do that. We’re not afraid to tear houses down, also.”

Some of these urban areas inside Sherman are designated as redevelopment zones. “Redevelopment zones are designed for just what Ron’s using them for,” said Sherman Mayor Bill Magers. “Ron’s doing a great job in targeting these areas for infill development.”

Infill development takes place where infrastructure already is in place and provides a deeper tax base for the city. “It’s a win for the city and a win for the homeowner,” said Magers. “Ron provides affordable housing for families who couldn’t otherwise afford a home.” Cupid’s Corner at East Sycamore and Throckmorton, is one such zone. Homeowners pay no taxes for the first five years; then, over the next five years, their taxes gradually rise to the appropriate rate. To encourage building, sewer and water tap fees and permit fees are reduced for the builder.

The City of Denison is developing a similar reinvestment system. The city’s chief building official, Glenn Northcutt, said he was pleased with the mini-division of Cupid Homes built on Munson Street. “The houses beautify the city, and they’re affordable,” Northcutt said. “It’s a good deal for everybody. Ron does build a good, tight little house for the money.”

Barton said that both the Sherman and the Denison officials have been “fantastic” to work with. “I’m grateful that the cities are proactive in this. Denison will be a long-term project and will be exciting. They’re going to clean it up, and it will be awesome.”
Although Cupid was created with the smaller home as its primary product, customers began to see the quality in the little houses and wanted it in larger ones. “The bigger houses were an accident,” Barton said. The larger custom homes are built using the same low cost pricing as the small houses, usually in more rural locations near Bells, Pottsboro, Tom Bean, and Whitewright. The larger homes have helped Cupid continue its success with the smaller homes.

Buying land ahead of time is also key to Cupid’s urban success, and Barton said he’s willing to sell to other builders who want to come into the urban areas, also. “Our whole purpose is to develop the urban area.”

It may not matter whether their business cards and billboards are pink or pea green. Barton said that Cupid’s biggest billboard is customer-service referrals. Take Christy Franklin, for example. Before her move from Florida, her brother, Steve Garrett, saw a Cupid sign and checked the company out before finding some houses for his sister to look at when she arrived. That’s when they fell in love with their house and with the neighborhood.

“We love our home,” she said. “This is where we’re going to be. I miss Florida every day, but wouldn’t leave our house.” After two years in Sherman, Franklin said they still find things they love about their house, and after two years, she has not had to have Cupid come out to fix anything at the house. “There’s not even a crack in the walls.” Garrett was so impressed with Cupid that he is having a 2,600 square-foot Cupid Home built in Bells.

Working together does not seem to have affected Barton and Lund’s relationship. They banter back and forth about schedules and dates, their mutual admiration for each other obvious. He talks up her energy and sales ability, and she praises his judgment on building matters. “She’s more fast paced and I’m more laid back so we balance each other,” Barton said. They even carried the Cupid theme to their vehicles, with her license plate reading “1 Cupid.” Barton is “Cupid 1.”

There may not be any “Cupids 2, 3, or 4,” but both principals credit the others on their staff, Forrest Francis, Sheryl Gilbride, Lindsay Wright, and Greg Pierson, as another reason that Cupid has worked so well. Francis has been in the real estate business for forty years.
Ron Barton lost a daughter to a drunk driver in 2001, and that tragedy has made him more aware of what others go through that may not be obvious on the surface. “You never know what anybody’s been through, so you’ve got to be kind,” he said. “You’ve got to smile and most importantly, you’ve got to do the right thing by people. Be nice to them. Build ’em good houses; give ’em something that nobody else has given.”