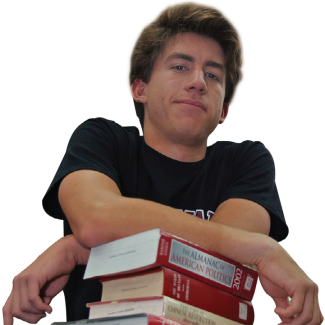 In the anteroom of the People’s Congress in Beijing, U.S. Ambassador to China Charles Whitfield nervously paces back and forth. In his early fifties, Whitfield has spent the better part of his adult years as ambassador to China. However, this is the defining moment, the culmination of his career. With tensions mounting between the U.S. and China, the world waits anxiously as Whitfield steps to the podium in the hall, his prepared speech the last chance for a diplomatic solution.

Charlie Whitfield is not yet the ambassador to China; he just graduated from Sherman High School. But he is a National Merit Scholarship Finalist, and that places him in an elite group of scholars of whom much is expected. Because of this distinction, many options lie open to Whitfield.

He will attend the Elliot School for International Affairs at George Washington University (the most expensive undergraduate university in the United States), where he has received the Presidential Scholarship, the highest merit-based award GWU offers. His goal is to serve in either the Foreign Service or domestic public office. “History has always been a hobby of mine, and what is International Affairs but history in the making? I’d like to be a part of making history.” Whitfield said his love for history and international affairs began in his freshman year at SHS, when he read the biography of German Emperor Frederick Barbarossa (1152-1190). From that biography, Whitfield realized that “History is just a series of international relations incidents.”

Born in Los Angeles in 1989, Whitfield said, “My parents always raised me with a bit of the Los Angeles world view, which gave me an open mind and a desire to learn. I’ve been raised to love learning. I think that’s the key: your environment at home molds you to be able to learn.

“In high school, I was given countless opportunities, which allowed me to expand my horizons and keep an open mind about the world in which we live. I was a member of the Junior Classical League, which taught me to appreciate history, geography and world affairs. But the most influential experiences through my high school years happened in the summers. After my freshman summer, I studied British history at Cambridge University in the United Kingdom. It was like new worlds were opened to me socially and culturally. The summer I studied at Brown University, I spent the time studying Mandarin Chinese, developing a love for languages and other cultures.”

Will he miss Sherman? “Well, actually I think I will in some ways. I’ve really come to love the small town atmosphere. Sherman is somewhat of an iconic American town. Oh, and football season. Gotta love those Friday night lights.”