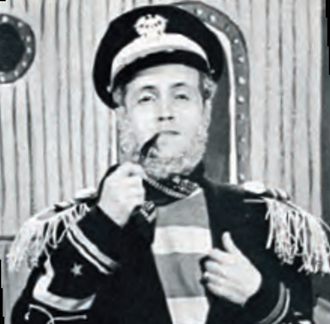 I enjoyed your tribute “Slam Bang Theater” and my good friend, Bill Camfield aka Icky Twerp. I worked with Bill at KFJZ and KTVT in the 50s and 60s. I’m happy you recalled and memorialized Bill and his many talents. But I would like to make a couple of corrections. Bill’s last name is CAMFIELD, not Canfield. It was not Bill who played the character “Cap’t Swabbie,” it was me and I still have the beribboned seaman’s jacket hanging in the closet. I did that character from 1957 to 1964. It was actually the late Stan Wilson who created the Swabbie character to host the Popeye cartoons. The “apes” were played by various crew members including Phil Crow and Clem Candelaria. Phil later became the director of the show. I am now 79 and I still enjoy remembering those years in Ft. Worth. Just a final note about Bill’s place in television histor y. He was elected to the Ernie Kovacks Comedy Hall of Fame a few years ago.

I was on “Slam Bang Theater” from the very beginning playing an ape and several other characters before becoming the director. Bill Camfield was the best man at my wedding and he is sorely missed. Just a few items that need correction. One of Bill’s characters was “Mortimer Moolah,” not Moneybags as reported in your story. Twerp’s full name was “Ickamore,” not Ickabod and it was George Nolen who played “Captain Swabbie.” After 36 years I retired from KTVT-TV in Ft. Worth. I was also Executive Producer of the Texas Rangers telecasts for 11 years and still do some work for the Rangers and the Dallas Mavericks.

4 thoughts on “Cap’t Swabbie Speaks Out”

At the heart of the thing, it is simple. Billy Holcomb loves movies, especially cowboy movies. “I like all of them, and I kept track of all of them—the bad men, the comics. I could tell you who the bad man was and the name of his horse.”