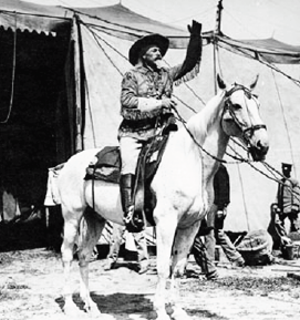 William F. “Buffalo Bill” Cody was born in LeClaire, Iowa, in 1846. During his early life he herded cattle and worked as a driver on a wagon train, went on to fur trapping and gold mining, then joined the Pony Express in 1860. After the Civil War, Cody scouted for the army and gained the nickname “Buffalo Bill” as a hunter.

Buffalo Bill’s show business career began on December 17, 1872, in Chicago; he was age 26. The Scouts of the Prairie was a drama created by dime novelist Ned Buntline, who appeared in it with Cody and another well-known scout, “Texas Jack” Omohundro. The following season Cody organized his own troupe.

Buffalo Bill’s Wild West used real cow-boys and cowgirls, recruited from ranches in the West. At first, few people shared Cody’s admiration of the cow-boys. Most people regarded them as coarse cattle drivers and used the term “cow-boy” as an insult. By the end of the 19th century, the cow-boy became the much more popular “cowboy,” thanks in large part to the Buffalo Bill Wild West shows. The shows demonstrated bronco riding, roping, and other skills that would later become part of public rodeos.

The Wild West was invited to England in 1887 to be the main American contribution to Queen Victoria’s Golden Jubilee celebration. Buffalo Bill’s Wild West was the hit of the celebration, and was credited with improving British and American relations.

Today there is a lot of confusion about the relationship between Buffalo Bill and the Indians. Cody treated his former foes with great respect and dignity, giving them an opportunity to leave the reservation and represent their culture when many were trying to destroy it. Wild West show posters frequently portrayed the Indian as “The American.”

Buffalo Bill never retired, even though he had hoped to do so. He did two years of farewell performances while his show was combined with Pawnee Bill’s in 1908 but discovered at the end of the second year that he could not retire. Growing personal debts due to bad investments left him with little to retire on. In 1917 Buffalo Bill died while visiting his sister’s home in Denver.

The Buffalo Bill Memorial Museum was begun by Johnny Baker, close friend and unofficial foster son to Buffalo Bill. Today it is one of the top visitor attractions in Denver and Colorado.

On September 25, 1941, Gasway followed her passion and opened her first shop in the newly renovated Binkley Hotel in Sherman. The lower floor of the hotel was subdivided into spaces for small shops with access to Travis Street. Gasway’s shop, Elinor’s, also had an entrance into the lobby of the hotel. This was an attractive feature, as husbands could pass the time in the hotel coffee shop or read the newspaper in the comfort of the lobby while their wives shopped.