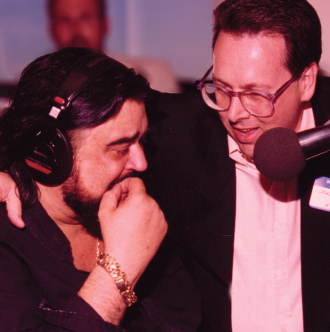 This publisher’s letter appeared in the Winter 08 issue of Texoma Living!.

The major premise of the success of Texoma Living! is the idea that everyone has a back-story. A back-story is the background of the subject. However each of us came to be in Texoma, we all have a back-story—who and what we were before. These stories are the best part of this magazine. This is a small part of my back-story and how I came to work for, and be a close friend of, legendary radio personality, Wolfman Jack.

Growing up in Oklahoma as a boomer, my media choices were simpler than today’s. Top 40 radio and rock ‘n’ roll music were the major influences on teenagers. In 1962 at age 13, I listened to local radio stations like Tulsa’s 1430 KELI-AM and 970 KAKC-AM. The flat terrain and powerful signals brought in Larry Lujack on Chicago’s 890 WLS-AM, and occasionally a Canadian signal would find its way onto the dial of my Sony six-transistor radio. But no radio signal had a greater influence on me than the one out of Ciudad Acuña, Mexico.

My friends first told me about the crazy DJ broadcasting late at night over some Mexican station. Way down at the bottom of the radio dial at 1570 was XERF-AM. After the sun had gone down you could hear XERF loud and clear. No wonder. The radio station blasted a 250,000-watt signal up through Texas, north, all the way into Northern Canada and as far south as Australia. XERF had five times the power of any U.S. radio station since it was not part of an international communications treaty that prevented overlapping of radio signals. XERF’s policy was, “We don’t need no stinking treaties!”

Wolfman Jack was the star attraction on XERF. The “howlin’, prowlin’” Wolfman was as mysterious as he was raucous. He played “race” records—hard core r&b, blues and the breed of rock ‘n’ roll you wouldn’t hear on the Top 40 stations. Wolfman was best listened to in bed under the covers, after your parents had gone to sleep. You could use the plug-in earphone to be even more seditious.

This was music I liked. It was fresh, new, and a little naughty. But ultimately, it wasn’t the music that attracted me—it was the DJ. What I loved was what happened between the records—the crazy commercials, telephone calls and guttural noises, the freedom to say anything. And people listened to every word. Wolfman was everything your parents feared—without rules or restraint.

The radio station in my hometown of Okmulgee, Oklahoma was KOKL-AM. The studio was on my route home from high school, on the second floor of the newspaper’s building. I sat on the sidewalk next to the Rexall Drug with my portable radio and watched through the big picture window of the studio as the disc jockey’s lips moved in sync with the tiny radio speaker. After a few weeks of hanging around outside, the DJ, Malcolm (Mickey) Reed came downstairs and invited me up to see the studio. If there was ever a doubt that radio was my future, that ended it.

Over the next ten years our family moved to Los Angeles, I graduated from high school, worked on L.A. radio, was drafted into the U.S. Army, got out and worked at stations in Central Texas including at Killeen and Belton, near Fort Hood.

Meanwhile in an entirely different universe, Wolfman Jack had moved on from XERF, to another superpower border blaster, “The Mighty 10-90” XERB-AM based in Tijuana, Baja California, Mexico.

From 1967 to 1971 Wolfman was a late night fixture on XERB for teens up and down the West Coast. Cruisin’ with the Wolfman was as much a part of life as carhops and drive-ins. Director George Lucas wrote and directed the seminal “American Graffiti” based on his own life growing up in the central California farming community of Modesto. He was one of those high school teens who listened to Wolfman on XERB.

In 1971, when Lucas asked Wolfman to be part of his movie, no one knew the film would become one of the top grossing films of all time or that it would launch Wolfman Jack into the entertainment mainstream and cement his fame forever.

Three things merged to make Wolfman the most famous DJ in the world. American Graffiti, his radio shows broadcast on the American Forces Radio and Television Network (AFRTS) to the troops in Vietnam, and his reign as host of NBC-TV’s “The Midnight Special.”

The AFRTS shows introduced Wolfman to millions of troops who grew up in places where the XERF or XERB radio signals didn’t reach. It wasn’t the raw original Wolfman of the early ‘60s, but he still had his mojo workin’ overtime.

Then there was “The Midnight Special.” For eight-and-a-half years, Wolfman Jack hosted the phenomenally successful and important “The Midnight Special” on NBC-TV. Remember, this was before MTV or music videos, and if you were a music group and wanted to be seen and heard by millions of music buyers you had to be on this late night network show. The weekend lineup of guests remains the most impressive for any show, ever.

In addition to the AFRTS shows, the weekly NBC show, a widely syndicated radio program (“Wolfman Jack’s Graffiti Gold”), and regular guest appearances on network TV, he made dozens of personal appearances including a 1974 one-nightstand for a small radio station in Killeen, Texas.

KIXS-FM was one of the first FM radio stations in Central Texas to broadcast rock music. My job as the program director and morning show DJ was to create a format that appealed to the troops returning from Vietnam and settling in at Fort Hood. It was an easy task—just play the rock chart hits.

The radio station was inventive and progressive in many ways. Contests and promotions were like those being done in the bigger markets and we could easily draw a large crowd to any station-sponsored event. Booking Wolfman Jack to appear at a Graffiti-themed listener event made perfect sense.

I won’t go into everything that happened the night the Wolfman came to town. But suffice to say it was a magical moment for me and fulfilled a dream of meeting him in person. The following morning, on a private airplane to DFW to catch a flight to another appearance, Wolfman told me to keep in touch and gave me the name and address of his personal manager, Don Kelley.

I took Wolfman’s advice and made sure his manager was kept apprised of my every success, no mater how insignificant. Over the next five years Kelley and I corresponded on a regular basis. We never spoke on the telephone or met in person, but Kelley became a major influence in my life.

What impressed me most about Kelley was his correspondence. Every letter was neatly and perfectly typed on heavy, high quality, embossed letterhead— from DKO, the Don Kelley Organization, Los Angeles, California. The handwritten notes—there was one in response to anything I sent him—were on gray deckled-edge stationary. Kelley taught me the power of professional letters and personal notes.

He raved about every promotion or contest I created and made me feel that he was keeping close tabs on my career. He even introduced me to Claude Hall, the powerful broadcast radio columnist for the recording industry trade magazine, Billboard. Hall would occasionally print my name in his widely-read and influential column, along side those of the famous name major city DJs.

On a trip to visit my mother in Los Angeles in 1978, I drove into Hollywood from the suburb of South Gate to drop by the offices of Audio Stimulation, Wolfman’s radio production company. I wanted to meet Kelley in person and had no presumption of seeing Wolfman again. That was too much to expect.

On “Saturday Night Live” there was a skit about a fussy male receptionist played by David Spade. No one could get past the gatekeeper. My experience at the Audio Stimulation office was similar. “And you are? And this is about?” About the time I was ready to walk out, Don Kelley appeared in the lobby and introduced himself. He had overheard my name and had come out to greet me. I felt like a welcomed guest. Kelley has that charm about him.

A half hour later I was sitting across the street at a restaurant with Kelley, Wolfman Jack, Wolf’s wife Lou Lamb Smith, his producer, Lonnie Napier and writer, Frank Cotolo. Wolfman recounted to the group his visit to Killeen, Texas years before and how impressed he had been with the radio station and me.

Two months later I left Texas and moved back to L.A. to take a job as Director of Promotion and Marketing for Wolfman Jack Productions. That job was the beginning of a ten-year run in Hollywood as an entertainment publicist for TV and music stars, and later as marketing director, working with Rick Dees, at the top-rated radio station in Los Angeles.

Don Kelley has been my closest friend for nearly thirty years. He is the reason I wrote this column. He is an avid reader of Texoma Living! and never fails to call me after each issue to go through a list of things he found interesting, or that needed work. We spoke last week as he was driving to Las Vegas to visit his daughter Kara. She is Chairman and CEO of the Las Vegas Chamber of Commerce, the third largest chamber organization in the nation. (Kara, as a high school senior in 1982, was a part time secretary in my public relations firm.)

Don asked me why I never wrote about my own back-story in the magazine. I suppose I have shied away from telling my own story due partly to not wanting to sound like I’m bragging, and partly thinking no one would believe it anyway. And it would absolutely have to be in installments. But, I’ve always followed Don’s advice.