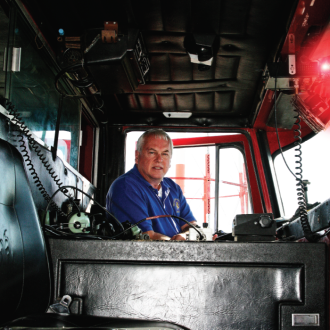 The rattle of the alarm echoed across the area, signaling a chlorine leak from a storage tank at the large industrial plant in Grayson County. As the men encased in the special gear that gives them the look of moon-walking astronauts went about the very serious job of dealing with the problem, a company representative standing a safe distance from the scene remarked. “This is pretty cool, we’ve been trying to get security to let us set off the alarm to make the training more realistic, but they wouldn’t let us do it. How did you pull it off?”

“I didn’t,” said Chief Bill Palya. “The alarm is going off because you’re having an incident.”

After days of classroom training, what was supposed to have been a hands-on practice drill turned into an actual hazardous-material emergency, and Palya, Chief of the Bonham Fire Department and founder of Haz-Co Emergency Response Training Center, got to see firsthand if the lessons he had taught his latest batch of hazmat technicians had been learned.

“They actually had a breach in a chlorine line, and it happened during our last training session,” Palya said. “It was pretty impressive. They controlled the environment, evacuated the environment, did the clean up, did all the things they were supposed to do.”

Since Palya started the Haz-Co school in 1994 at Grayson County Airport, the old Perrin Air Force Base, more than fourteen hundred students have passed through its sometimes smoky doors, learning fire fighting techniques, emergency medical procedures, and hazardous material control. Graduates can get a job at pretty much any fire department or industrial facility nationwide when they are done. Haz-Co is that good.

“We’ve had guys come from Florida, Massachusetts, California,” said the chief. “We have firefighters in Beaumont, Richardson, Dallas, Denton, Wichita Falls, Tyler, and Longview. We have firefighters working in seventy percent of the fire departments in Texas.”

The airport’s old fire station, a relic of Perrin Field, was scheduled to be razed when Palya asked to buy it. “I got hold of the airport board and airport manager and told them the building was a piece of history. It’s one of the few still left from the original airbase.”

The building had history, but little else to commend it. “The building was stripped out, no wiring, no electrical, no plumbing, nothing,” said Palya. Airport officials familiar with Palya’s plan for a training school suggested he build something new. But men with “Chief” in front of their names are used to getting their way, and Palya persisted. Fourteen years and $100,000 later, he has the only private fire fighting, hazardous materials academy in this part of the country, and a bit of Grayson County history still stands.

Haz-Co prides itself on providing a hands-on learning experience. Classroom work is divided into thirty-two sections and when one classroom section is finished, the real world applications begin. Within the first two days of training, students are putting on firefighting gear and stumbling through smoke mazes.

Whether they are learning how to put on their Self-Contained Breathing Apparatus (SCBA) or to find their way through a scorching building, discipline and taking responsibility for fellow firefighters are lessons constantly hammered home. Chief Palya makes no apologies for being hard on students.

He breaks the classes into three platoons, similar to three shifts at a fire department. Each platoon has a leader, who had better make sure each of his men or women (six women have gone through the academy) are ready for each class— on time, with proper materials, proper attitude, proper dress. If they are not ready, the platoon leader answers for the shortfalls. During the course, each student gets to serve as a platoon leader.

“We stress discipline and accountability for one another,” Chief Palya said. “Firefighters never die individually; they die in groups of three or four, because everything we do, we have to do as a group. That’s why we drill responsibility for each other into them.”

Sometimes that structure does not go over well. “We had one student, a chief for a volunteer department who came through the academy. He’d been a volunteer fire fighter for eight years and didn’t like the way I was conducting the training. Three days before the final exams, he let me have it.

“He said he was glad it was almost over, that he was through with the school and through with me,” the chief said. “He told me I was a sorry S.O.B., said that he would never work for anyone like me, and if this was what the fire service was like, forget it.”

Kevin Walton was the student, and he changed his mind. He is now an instructor at Haz-Co. “Kevin has been with me eight years now. He’s one of the best instructors I have, and he’s a co-owner in the business,” said Palya.

“I couldn’t stand him,” Chief Kevin Walton said of Palya. “He wanted to make an example of me and I didn’t like it.” Like it or not, Walton learned it, and now he is making examples of some of his students, for their own good of course.

One of Walton’s techniques involves a sixteen-pound bowling ball. If a student is late or out of uniform or messes up an exercise, he gets a new partner, the bowling ball to lug around until instructors decide he can part with his round companion.

If the student goes out to dinner, that bowling ball better be with him. When he goes to bed, the ball better be right next to him. If he goes to the movies, guess what nestles at his feet? “I’ve had students who’ve carried a bowling ball the entire class. They didn’t get the concept until they were ready to finish,” Walton said.

In some jobs you can cut corners and come out a hero. In fire fighting, if you cut corners, you can come out a corpse and take down the people who were relying on you. That is why something as seemingly innocuous as learning to tie knots is made difficult for students. Firefighters are often in dark, smoke-filled buildings, so they learn to tie knots by feel, with their hands under a table. They cannot look at what they are doing. Tying the right knot, blindly without visual references, could save a life.

The people who take on this challenging occupation are often coming from other careers, butcher, boxer, nurse, even minor league baseball. Twenty-seven year old Jeremy West spent four and a half seasons playing minor league baseball and wrapped his career up with the Chicago White Sox. 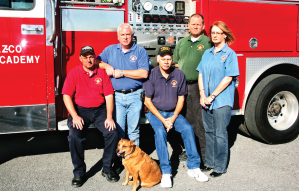 “I was stuck. I wasn’t playing every day. My career was coming to an end, and I could see it,” West said. “I didn’t want to be one of those guys who stuck around until I was thirty years old trying to make it, so I hung it up and went after firefighting. If I couldn’t be in the Big Leagues, I wanted to be in firefighting.”

West is originally from Las Vegas and said many of his friends have had tough times getting into area fire departments. “One buddy just got into firefighting after waiting eight years. We don’t have fire schools there. First, you’re hired by a fire department, and then they put you through the academy.”

Applicants who have graduated from Haz-Co training already have the skill sets departments are looking for. The course runs anywhere from three-and-a-half months to six months, depending on how many hours the student can put in at once and on whether they take the emergency medical training as well. When they extinguish the last flames of their training, Haz-Co grads will be certified firefighters and perhaps more.

“If they make it through the course, most likely they have firefighting in their blood,” said Walton.

“This is the greatest job in the world. There aren’t too many people who can wake up and say I love what I do,” he said. “As a firefighter, you work on average about ten days a month, and it’s not a job where you do the same thing every day. You never know what you’re going to do when you go on duty.”

It could be washing the trucks, dousing a brushfire, or pulling a victim from a blazing house. Whatever comes their way, Haz-Co Emergency Response Training Center firefighters know they will be equipped to handle it.

You are irritable. Your blood pressure looks like a pro-bowler’s high score, and everyone is jumping up and down on your last nerve. Life gets tedious, don’t it? Sherman-based therapist, author, and life coach Brent O’Bannon can provide wisdom to keep you from snapping like a pop star taking that third trip to rehab.