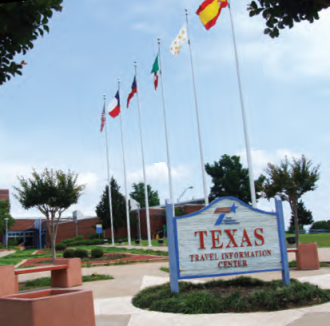 It’s no wonder so many people from the other territories want to come see us. And because we’re such a hospitable part of the nation our state has invested millions of dollars to make each and every visitor feel welcome.

Anyone travelling U.S. Highway 75 from north to south will eventually arrive at the Texas state line and find one of our official Welcome Centers.

More than 500,000 vehicles pull off US 75 just south of the Red River Bridge each year and visit the big brown building shaped like the prow of a boat, with the Six Flags of Texas flapping overhead.

The Texas Department of Transportation’s Denison Travel Center is one of the busiest in the state. Joe Paz, an ex disc jockey from South Texas, and his staff are ready with answers to the multitude of questions travelers have. “The most popular question is ‘Where are the cowboys?’” said Paz. “Everyone is looking for that western feel. They’re looking for cowboys and the things they saw on the TV show Dallas—oil wells and horse ranches.”

Paz said tourists ask where places are, where people are buried, even where to find a doctor. Language barriers can be tough, and employees learn to communicate with a heavy dose of sign language mixed with pointing.

Mack Hayes worked at the center part-time for eight years after he retired, and he became something of fixture in the place. His stories might outnumber the brochures on things to see and do.

“I’m always amazed at how often people don’t have any idea where they are,” he said and told about the man from Muskogee, Oklahoma, who dropped in on his way to Kansas City by way of…? “One woman came up from Houston looking for Abilene. She had crossed the river and doubled back, stopping in here. She said someone in Houston told her to go north on 75 until she got to I-20; then she was to head west. We politely pointed out that she had missed the I-20 exit in Dallas and drew a map for her. Then she asked us to fill up her tank with gas!”

The most asked-about local attractions are Lake Texoma, the Eisenhower Birth Place, and souvenirs; everybody wants to know where they can get Texas souvenirs. “I send them to a place across the bridge in Oklahoma,” said one of the attendants. “I don’t think there’s anything around here close.”

The center is a place for weary travelers to take a break before returning to the road. There are picnic tables and restrooms that are open around the clock, and vending machines and a video theater for viewing various attractions and destinations, as well as maps and brochures galore. More importantly, there’s always a big “Welcome to Texas” on arrival and a “Drive safe, now and ya’ll come back” when it’s time to leave.

The alarm sounds at 4am. In a dimly lighted barn the horses are fed and saddled, the stalls cleaned, all before the light of day, all before the real work can begin. The mornings may be routine, but the rest of the day is far from it.

The 53rd Annual Sherman Service League Charity Ball was held in March, at Tanglewood Resort. This year’s theme was Casino Royale, and guests were treated to Vegasstyle décor, a lavish buffet, professional gaming tables and music by Groove Academy. The proceeds went to benefit the Service League’s 17 sponsored organizations, including the Children’s Advocacy Center, […]