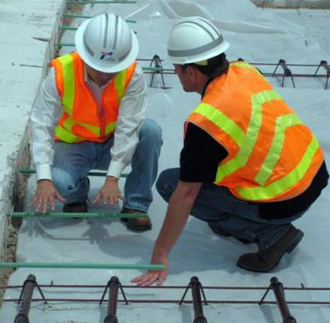 Backups as much as a mile, closed exits and narrow lanes are the norm along U.S. 75 thorugh Sherman and Denison lately. Exactly what is the Texas Department of Transportation (TXDOT) doing out there? First, the rumors:

There are three primary factors contributing to the repairs: the construction of the road, money, and the need for research. First, square by square replacement of the highway can be attributed to the way the road was built. “When the road was first laid thirty years ago, it was poured slab by slab in sections, as was the accepted practice at the time. That’s why we maintain it that way,” said Noel Prananatham, assistant chief engineer on the project. “Performing isolated maintenance is now a yearly task. Since then, engineering has evolved to allow ‘continuous pour’ roads that are cheaper to build and repair.”

The last significant work on the highway was about twenty years ago, and under normal circumstances, those repairs should still be good, but, “…in recent years, traffic volume has sharply increased to around sixty thousand cars a day, and that’s more than the road was designed to handle,” Prananatham said.

“Replacing the entire road would cost upwards of $160 million, while replacing each section one-by-one as it breaks cuts the cost down to around thirty to forty million, but it also increases the time needed for the repairs.” That doesn’t mean that the old highway isn’t benefiting from new technology. “We’re using a technique called ‘slotstitching,’” said the engineer. “It stitches one strong slab to one that has begun to fail in order to increase its life by a few years.”

Planning for the future, scientists and engineers from Texas Tech and the TXDOT research division have installed sensors in the repaired road sections and are testing a new method of repair which would simply pour concrete over failing slabs, eliminating the need to pull them out and replace them. “This method has the potential to save the government millions of dollars and increase the life of the pavement by fifteen to twenty years,” said Prananatham.