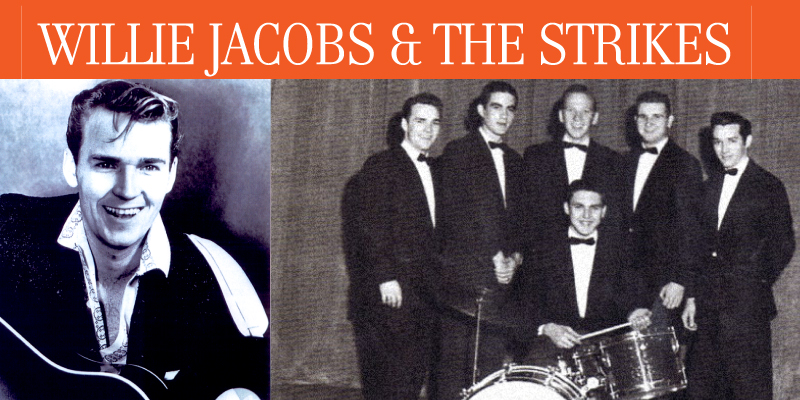 At the end of one spring semester, when Willie Jacobs was in school at North Texas in Denton in the mid 1950’s, a friend and classmate ask him if he would like to join a band he was forming to play around Wink, Texas for the summer. “No,” Jacobs told Roy Orbison, “you’re never going to make any money in the music business; I’m going to the wheat harvest.” Jacobs laughs when he tells that story, but you know he sometimes wonders—what if?

Jacobs, who was born in Grandview, started out at North Texas with a country trio which also included Ken Scott and Paul Kunz. Jacobs played guitar and sang lead. The country sound of Hank Williams moved to the Rockabilly sound when the group added three more members and took the name “The Strikes.” “Somebody said we were sure to ‘strike out,’” said Jacobs.

Their first recording, in 1956, was “Baby I’m Sorry” and “If You Can’t Rock Me.” Jacobs and bassist Don Alexander wrote the songs. They would record only two more records before Jacobs went into the army in 1957. When that happened the band broke up with the musicians going very different ways. Kunz went into education, Parsons made a career of the U.S. Navy, Alexander became a TV news anchor and Cornelius opened a tire store.

Jacobs, well, when he got out of the army he moved to Sherman and worked as reporter for the Herald Democrat for a while and then went into the insurance business. Ricky Nelson did a version of “If You Can’t Rock Me” on his first album. The album was a hit, Nelson became a star, and Willie Jacobs still gets a royalty check every now and then.

1 thought on “Willie Jacobs & The Strikes”

Roadside flowers are the glory of Texomaland throughout the whole warm season. Some of the most handsome are so common that we think of them as weeds or don’t notice them at all. But if you watch closely as summer winds down and fall tunes up for the year’s last performance, you may witness some of the most beautiful native flowers of all.

Fifty years ago my third-cousin flew into Okmulgee, Okla. Municipal Airport. Our family met him at the hanger after he taxied up the runway. I truly expected to see Sky King walk down the wing. It was after all, the exact same kind of airplane Skylar J. “Sky” King flew on TV—a twin-engine Cessna 310-B.