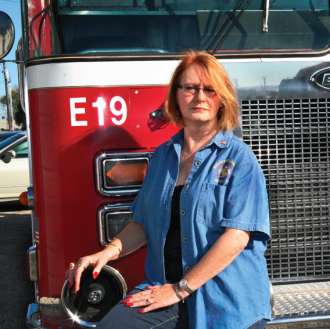 My dad, J.D. Bush, was a civilian firefighter, Crew Chief, at Perrin Air Force Base for 28 years. He retired when the base closed in 1971. I started to work for Chief Bill Palya in November 2001. When he told me that he was trying to get possession of the old fire station, I was thrilled. The building has basically remained empty for over 30 years. Tenants came and went, but the site deteriorated over time without constant upkeep. It took 14 years of wrangling with the powers that be at Grayson County Airport (now North Texas Regional Airport), but Bill finally found himself the owner of a shabby, gutted, broken-down building. The remodeling project was probably even more than anyone imagined, but it finally came together, and Haz-Co has its new home. Walking inside the building for the first time in many years, the memories flooded over me. When my sister, Jane, and I would visit Dad at work, he would let us sit in the fire truck and hit the button to blow the siren—what a thrill that was! As Haz-Co took ownership of the building’s structure—and spirit—I thought to myself how proud my Dad would be if he were alive to see all of the care and love put into the remodeling project. After being vacant for 30 years the old fire station has come back to life. The training center is still a work in progress—it probably will always be changed and adapted. Recruits will pass through the doors—some will make it, others will not. Those that do graduate can feel proud that they have been a part of a proud history of firefighting and a continuing tradition of saving property and lives. From my office in the facility I watch the men and women file into the classroom, and then out into the truck bays. It feel good knowing that I’m sitting in the very same office my Dad occupied so many years ago.

Long before HGTV, Carol Davis was performing magical makeovers on Sherman homes and offices. She approaches every job with an almost ferocious enthusiasm. “I’ve always been passionate about the interior design business,” Carol said.

When I was asked to create a spectacular room for the cover of Texoma Living!’s first Christmas issue, I wanted to design and share with the readers something entirely unexpected. Keeping my eye on the trends in elegant décor, I noticed that the home furnishings trends were flowing over into Christmas décor’ with clearer color, namely shades of blue and silver.

After 38 years of marriage, the doctors P.T. and Sara Swamy had discussed most every subject—including death. Sara’s mother, grandmother, great-grandmother, as well as her aunt, lived well past 90, and Sam, as Sara affectionately called her husband, was sure he would precede her in death, but a automobile accident took Sara’s life on June 17, 2005, the day after her 62nd birthday.