At 61 years of age, I consider myself to be fairly safe and sane. Fear of being maimed or killed is what helps older folks survive long enough to get to be older folks. 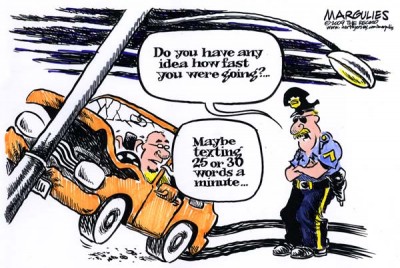 The other day I got a rare text message on my cell phone. It took a second to figure out what it was, that’s how rarely people text me. It was an associate communicating they would be late. That’s one of those things you might want to text to avoid catching hell for—if you had to have an actual voice communication.

So, I meandered through the menu with my way-too-big fingers on the way-to-small keyboard, found the “reply to text” button and started to peck out “okiwillseeyouatwork.” I have not figured out how to put a space between the words. What’s so bad about that? I was going 60 miles an hour down U.S.  75.

Almost as soon as I became aware that I was behind the wheel I put down the phone and thought to myself, “This is insane. What the hell am I doing?”

People texting, putting on makeup, combing hair, shaving, reading, watching a DVD, yelling at a kid in the backseat while making serious eye contact in the rearview mirror, or eating a double-cheeseburger and holding a 32-ounce Big Gulp—while driving, isn’t that unusual. It should be. It’s really dangerous. But you already know that, if you’re old like me.

At first sight I was drawn to her shiny stainless steel outfit and fascinated by the colorful screen—blinking at me like some come hither siren, Then her voice. “Welcome to Albertson’s where check out is fast and easy.