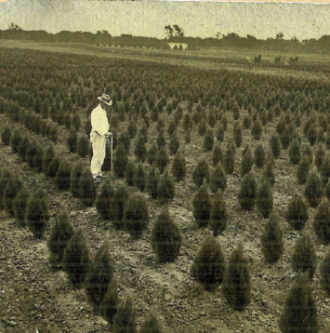 This article appeared in the Spring 2007 issue of Texoxa Living!.

When the cold wind blows, and the sun hides behind ominous clouds, gardeners sit by the fire and peruse the seed catalogues. The pictures of flowers and long rows of trees heavy with fruit may grow only in their dreams, but those dreams help pass the time until they can get back into the dirt.

For many years, those winter dreams were often nurtured by a catalogue from The Texas Nursery Company in Sherman. From the turn of the last century until after World War II, it was one of the largest nurseries in the Southwest, and, as a smaller entity, it lasted until the 1960s. The company is gone now, but its living legacy can be seen in many of the trees and plants that enhance homes and schools and businesses in North Texas and beyond.

Elbert W. Kirkpatrick and C. C. Mayhew started the company in 1898, as the Texas Nursery and Floral Company. A nursery man of some renown, Kirkpatrick had been in the business since 1874, when he started in White’s Grove. In 1887, he moved to McKinney where he ran his own nursery and also presided over the affairs of both the Whitesboro Orchard and Fruit Company and the Nueces Land and Immigration Company.

In 1902, Kirkpatrick moved his operation north to Sherman, where the railroad connections made shipping to all parts of the Southwest convenient, and took a new name, The Texas Nursery Company. In 1906, Kirkpatrick joined with John S. Kerr’s Commercial Nursery and Orchard Company, also a McKinney concern, taking on Kerr as vice president of the operation.

If it grew in Texas soil, Kirkpatrick, Kerr and Mayhew sold it. The company’s headquarters were at the foot of Walnut Street in a building that now houses Mitchell Construction. The fields and farms extended south to Post Oak Creek and southeast to Montgomery Street. Other farm sites were scattered about the county, most notable near Spout Springs, northwest of Pottsboro. The nursery expanded into the Indian Territory, where remnants of the operations can still be seen north of Colbert, Okla.

The nursery shipped plants for wholesale all over the Southwest and did a substantial retail business in the Sherman area. In 1924, as part of the 75th anniversary celebration of Austin College, the Texas Nursery took on a commemorative landscaping project, planting many of the oaks and sycamores that shade the campus today.

The company’s sycamores lined the new highway—new that is in 1929—between Sherman and Denison. The route is still there, now designated SH 91, and many of those trees still stand tall west of the current road.

Hugh E. Hall, a family friend of the Mayhews, came to Sherman in 1901 as secretary-treasurer of the company, also serving as landscape architect and personnel manager. Although only nine when his father died, Clyde Hall still recalls time spent at the nursery. ”My brother and I were permitted to roam the grounds all the way to the creek. On Saturday nights we were always present for payday, when my father would pay off the workers. We’d spend the night sliding down the rails alongside the stair steps.

“We lived on South Travis, some four blocks from the nursery. Whenever we heard the fire engines, the entire family became excited, fearful that the huge barn or warehouse that stood about a block east of the headquarters might be on fire.”

Hall also recalls another fire and his father’s concern for the safety of some of the company’s black employees. “When the courthouse was burned by the mob in 1930, my father took my brother and me down to watch the fire from the southeast corner of the square. When he saw the mob cutting the fire hoses, he got us out of there in a hurry, sending the family to my grandfather’s home in Van Alstyne.

He came back to Sherman and rounded up 20 or more of his workers and their families and took them to our house. It proved a safe haven from the mobs that were burning and terrorizing black people in the city.”

Viola Fulencheck Dutton worked on the Texas Nursery farm north of Pottsboro in the years before WWII, and she wrote of her experiences in the History of Grayson County Texas Volume II, published by the Grayson County Frontier Village in 1981. “Around 75 people worked at the nursery at one time. They lived in houses and tents in the area. Field hands made 10 cents an hour and shop hands made 15 cents. Most worked a 10 hour day. Hands got paid once a month and could buy groceries at a company store at the nursery.

The company’s signature offering was the crepe myrtle. At one time the Texas Nursery was the number one provider of crepe myrtle plants in the entire country, and their horticulturists developed new and colorful strains of the popular ornamental bush.

They sold pecan trees and berry bushes and flowers from a retail floral shop run by Walter Carpenter. That building still stands, 100 yards southeast of the headquarters. It is now a church.

Elbert Kirkpatrick died in 1924 and John Kerr in 1925. The loss of two of the founders, and the economic turndown of the Great Depression of the 30s slowed the company’s business. The new management was not as aggressive as Kirkpatrick and Kerr had been. A smaller operation continued after World War II, and into the early 1960s the company was still putting out a sizable catalog and offering plants to growers as far north as Kansas and Missouri.

The company was proud of its products and proud of the trust earned from the people who bought them, as this excerpt from a customer’s letter shows. “All the trees I bought from you three years ago came true to name and were fine trees. This is my reason for wanting trees from you again. I bought some trees from (a competitor) also some from (another rival). They did not come true to name and were of no value to me. I cut them down and cast them out of my orchard. I have the largest and finest orchard in western Tennessee.”

Special thanks to the Red River Museum for their help researching this story and for the loan of photographs from their extensive collection.

Diana Cosby could be a heroine in one of her best-selling romance novels. She looks the part, long hair the color of single malt Scotch, bright eyes and an easy smile.