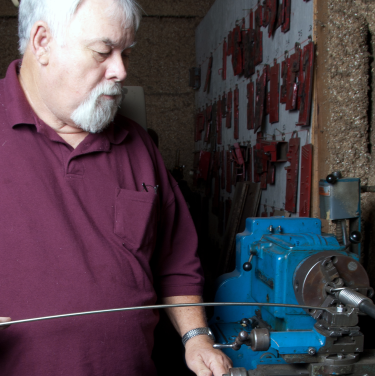 Tom Kirby of Howe knows more than a little bit about bits. His company, Red River Bits, makes about five hundred different kinds of bits for the equestrian trade, mostly for working cowboys and people who saddle up just for the pleasure of riding. “Controlling a horse’s head is where the bit comes in handy. A lot of people think you guide them with it, and you do to a certain extent, but after a horse is trained you don’t have to use the bit anymore. Think what a bit does. It sets the horses head,” Kirby said.

A basic bit is composed of three parts, the mouth piece, shanks and rings. All of these parts are made by hand in Kirby’s former garage by three employees. At one time, the company had fourteen employees, but a heart attack a few years back led Kirby to downsize.

Kirby said most of his business now comes from producing custom bits for customers in this country and abroad. “I’ve got accounts in Puerto Rico, Hawaii, Italy, Canada and Mexico. I used to ship a ton of bits to Germany,” he said.

“We pretty well know what a horse’s mouth is. Some horses heads are a little bit bigger, the mouth a little wider, but it’s all a standard thing,” said Kirby. Customers who order custom bits often want the mouth a little wider and the shank a little shorter so. “They’ll draw a picture of it, specifying the size of the bars of steel they want, and I make it from that. Basically, there are only five different styles, but there’s a whole bunch of bits made off of those five styles.”

A bit starts as a steel rod that comes in either twelve or twenty-four foot lengths. Kirby cuts, bends, grinds, sands, welds, and shapes the metal into either a custom bit, or one of the standard models produced. Black steel is used for the mouth pieces to help the horse’s mouth stay moist. Stainless steel is used for the shanks.

A native of the Kentucky Town community and a graduate of the Whitewright school system, Kirby worked for some large companies in the Metroplex , including Haggar’s, before signing on with Potts Longhorn Leather Company of Dallas. At Potts, where he spent twenty-two years, Kirby learned the ins and outs of bit making. When Potts went bankrupt in 1990 Kirby started Red River Bits.

On a working cattle ranch, horses are used for cutting and roping. Jumping and barrel racing are sports that require horses to perform widely different tasks. Arabian horses are often used for instructional programs and therapeutic riding. “The biggest market out here right now is call barrel racing. Where there’s one bit for a cutting horse, you might make fifty for barrel racers,” he said.

“Imports are hurting us. They’ll make a bit that looks exactly like mine, but for a third of my price. It’s hard to compete with that. But most people who really know horses don’t want any import. They want a custom made bit and that’s where I come in.”