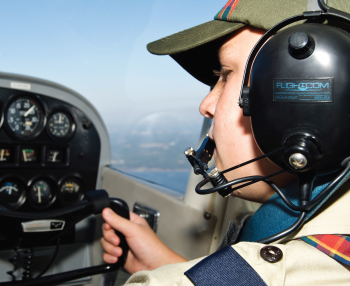 “A single flight can stimulate a child’s desire to become a pilot. It’s a common occurrence.”

Fifty years ago my third-cousin flew into Okmulgee, Okla. Municipal Airport. Our family met him at the hanger after he taxied up the runway. I truly expected to see Sky King walk down the wing. It was after all, the exact same kind of airplane Skylar J. “Sky” King flew on TV—a twin-engine Cessna 310-B. After a 15-minute flight and then for the next thirty-so years I maintained a passion for flying. At one point I enrolled in a training class and did fine until my first actual flight where I promptly became deathly nauseous. I shouldn’t have been surprised—on a trip to Disneyland many years earlier I threw up on the Mad Hatter’s spinning tea cups. I get carsick when riding in the backseat.  Each year, Texoma pilots—members of the Experimental Aircraft Association— invite young people eight-17 years of age to take a first-time test ride as a part of the association’s Young Eagles program. Ross Richardson, Winn Harris, Bobby Brown, Rick Simmons, Leldon Locke and Bob Cutler volunteered their aircraft and their flying skills to let kids experience the thrill of flight. On the ground volunteers like David Pittman, Gary Hill, Evans Gauthier, Billy Dollarhide, Norm Aston, Paula Richardson, and Pat Purcell helped coordinate. Grayson County Airport general manager, Mike Shahan, hosted the event this time around for 53 area boys and girls. No doubt there were future pilots in the crowd—all they needed was someone to kick-start the dream.