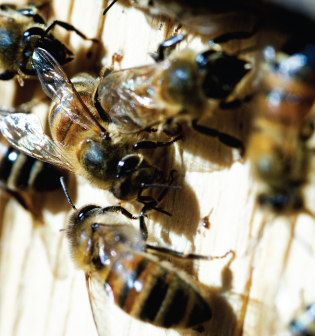 Stephen Olner is best known to readers of Texoma Living! as the photographer who covers most of the major events for our party pages, and for his architectural photography on the pages of our Style section. He is one of those immigrants we don’t hear so much about—coming across the Atlantic, rather than the Red River.

Two years ago, Stephen came to visit America and stayed. Now a legal alien and married to a U.S. citizen, Stephen Olner has fully immersed himself into American culture. Living across the Texas border in Colbert, Oklahoma with his new wife, stepchildren and new baby girl, Stephen has found that adventures are often found as close as the backyard. “I never intended to become a beekeeper, amateur or otherwise,” said Olner. “Helping a friend clear some property we cut down a good-sized tree and when it was on its side we noticed a bunch of bees swarming around a hole.” A chainsaw cut revealed at least 10 feet of bees and their honey.

“Not even a day before I saw a news report on CNN about the problems caused by disappearing bees and the effect on agriculture,” said Olner. “It just seemed that we had an obligation to try and save this hive rather than disrupt the cycle of nature that depends on their pollination of the fields.”

As it turned out, no beekeeper within 100 miles was willing to take time to try and rescue the ill-fated hive. Late in the season, the chance for survivability was slim. The bees would need to be settled into a new hive and cared for during the cold months. “A guy up in McAlister, Oklahoma sold me some used hives and reserve honey. I think he was a little surprised that I had no equipment whatsoever, and absolutely no knowledge beyond what I had found on the Internet.”

Olner finally managed to cobble together the essential gear—netted suit, head covering, smoker— and set up shop in the backyard with two boxes. Unfortunately, the stress of having its hive disturbed and perhaps Olner’s own inexperience, the bees did not survive.

Spring has arrived and a new colony of bees is hard at work, flying from their base station in Olner’s backyard, becoming familiar sights on neighbor’s flowers. Stepchildren Shelby and Sara have their own hives, each decorated by its keeper.

» Bees have 5 eyes
» Bees fly about 20 mph
» Bees are insects, so they have 6 legs
» Male bees in the hive are called drones
» Female bees in the hive (except the queen) are called worker bees
» Losing its stinger will cause a bee to die
» Bees carry pollen on their hind legs called a pollen basket or corbicula
» An average beehive can hold around 50,000 bees
» Foragers must collect nectar from about 2 million flowers to make 1 pound of honey.
» The average forager makes about 1/12 th of a teaspoon of honey in her lifetime.
» Average per capita honey consumption in the US is 1.3 pounds.
» Bees have 2 pairs of wings.
» The principal form of communication among honey bees is through chemicals called pheromones.
» Bees are important because they pollinate approximately 130 agricultural crops in the US including fruit, fiber, nut, and vegetable crops. Bee pollination adds approximately 14 billion dollars annually to improved crop yield and quality.

What To Do if you find bees on your property

» Stay away from all Honey Bee swarms and colonies
» Get away from bees as quickly as possible.
» While running away protect your face and eyes as much as possible.
» Take shelter in an enclosed area such as a car, truck, or a building.
» Call a local beekeeper, pest control company, or local cooperative extension agent for assistance.
» Do not hide in water or thick brush.
» Do not stand still and swat at bees; rapid movements will cause them to sting.

» Look the same
» Protect their nests from predators by stinging
» An individual bee can sting only once and then dies
» Have the same kind of venom
» Pollinate flowers, produce honey and wax

» Respond quickly to disturbances by people and animals 50 feet or more from the nest.
» Sense vibrations from power equipment 100 feet or more from the nest.
» Sting in large numbers.
» Will chase an enemy up to a ¼ mile or more.
» Have a higher rate of reproduction (swarm more frequently).
» Nest in smaller cavities and sometimes underground (e.g. water meters and animal burrows).

Find these resources and much more online at http://honeybee.tamu.edu.

The Art of Neon