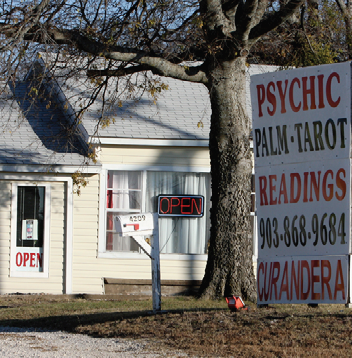 It is in a modest white house just off Texoma Parkway with a big wooden sign in the front; it reads PSYCHIC in bold red letters.

Georgia wanted to go there one day, so I took her. Curious, I followed Georgia into the house. There were no voodoo dolls or neon lights, no crystal balls, no eerie music or half-burnt candles, just an unassuming waiting room with a big screen TV and a leather couch. The only hints of being in the residence of a medium were the pictures of tarot cards lined up on one of the plywood walls.

We were quiet as we entered, but Curandera knew we were there. Good start, I thought. She asked who would be getting a reading, and I looked at Georgia; SheIn smiled. “Follow me,” Curandera said.

I asked Curandera if I could watch. “I’m sorry, it has to be private,” she said. Disappointed, I pulled two twenties out of my wallet, handed them to Georgia and watched the two women disappear to a part of the house I wasn’t allowed to enter.

I did everything I could to try and hear them. I stuck my ear against the wall, tried to poke my head around the corner, even tried to pick up their reflection in a window. It was no use, the TV was turned up too loud, and I was afraid if I turned it down Curandera would keep my money and tell Georgia that I had interfered with the reading.

I resigned myself to waiting. Georgia came out smiling after about ten minutes—that’s four dollars a minute, but who’s counting. We thanked her and left.

“She told me I’m supposed to keep my reading private,” Georgia said, climbing in the car. I told her that since I paid for it, technically the reading was mine and that she was just an intermediary. The argument worked; Georgia told me everything. She told me that Curandera had said that we would be happy together, that I was Georgia’s one true love, that she would have a long life, and that we would live it together, happily raising two children. She said that soon we would be taking a trip to San Antonio together and that even though there was another person who had feelings for her, our engagement was imminent. She said Georgia had a bright aura and warned her to stay away from tattoos and piercings because she was in danger of getting an infection.

It was a productive reading, one that left Georgia and me with all the information we could have possibly hoped for. This is particularly true because Georgia and I are good friends, nothing more, and because Georgia’s real boyfriend had been to Curandera a year before, when he was told he had a bright aura and to stay away from tattoos and piercings because there was a danger he would get an infection.