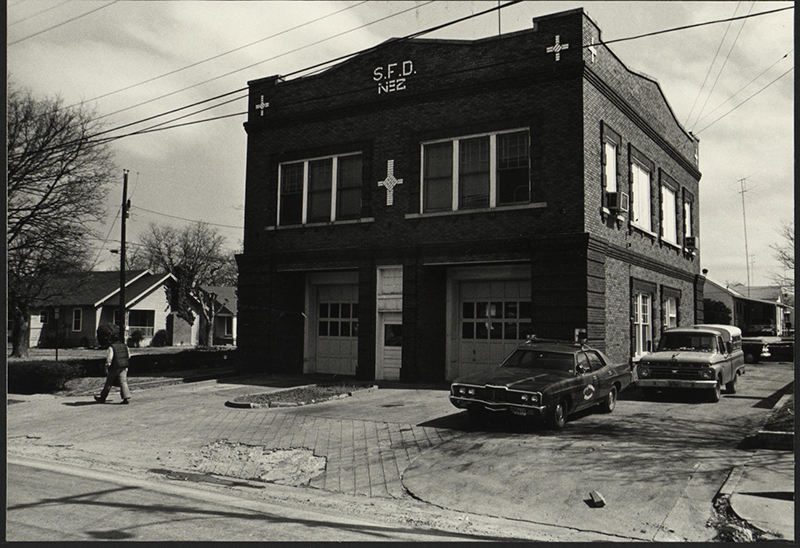 “You’re crazy!” That was Karen’s reaction when her husband, Tom Shields, said he wanted to leave their comfortable home in far West Sherman to live in a long-abandoned fire station near Austin College. But she’d had a similar reaction in 1985, when he wanted to leave a picturesque Dallas residence and raise their kids in a small town.

Gourmet coffee, of course. Tom and Karen own, among other enterprises, the Boiler Room, an art-filled coffee house on a key street funneling cars from Highway 75 to Sherman’s Courthouse Square. Presided over by the Shields’ two grown children, Brandon and Meredith, the Boiler Room occupies the west end of the Sherman Steam Laundry building, constructed in 1901.

“We love bringing new life to old things, giving them a second chance,” Karen said recently. Call it adaptive reuse (as the Sherman Preservation League did in a 2007 award), rehabilitation, renovation, recycling or redemption, it’s the theme song of this couple’s empty-nest years.

After the move to Sherman, Tom commuted back to Dallas for business, while Karen taught at Texoma Christian School. At the end of 1990, they bought the Steam Laundry building. “It was a cool old building, and I saw an opportunity for rental income,” Tom said. “In the late 1970s, a man from California had remodeled it as offices. Now the bank owned it and wanted it sold. It was 40 percent occupied and reminded me of the Warehouse District in Dallas. I guess most people saw it as a headache and didn’t want to fool with it, but I was hoping I could give it some personal attention and turn it into a good opportunity.”

The investment paid off. Professionals—lawyers, accountants, doctors, dentists, counselors and Tom’s insurance business—occupy the suites. A carriage house out back has expanded over the years to accommodate more tenants.

At the west end of the laundry building, one space remained unused: the former boiler room. In August 2005, Tom and Karen had begun work to turn it into a coffee house, when son Brandon was diagnosed with a brain tumor. Surgery, treatments and recovery followed. Karen remembered asking Tom, “I guess we won’t do the coffee shop, right?”

“No,” he replied. “We are going to keep going on that. We are not going to build our lives around Brandon’s illness.”

“Somehow that was such a mood lifter for me,” Karen said.

Perhaps Tom reacted this way because he had had a similar experience at Brandon’s age. Raised on a farm in the Texas Panhandle, he excelled in high school sports and went to Texas Tech on a football scholarship. While there, he nearly died from an injury suffered while playing the game. “I realized how precious life is and how you have to make the most of it. There is a saying that sums up what I learned: There is no dress rehearsal for life.”

The Boiler Room opened in December 2005. Here college students peck at laptops, poets exchange drafts, business people confer intently. No one ever hints that you have been at a table too long. Today, in addition to coffee and tea, the shop offers sophisticated sandwiches, soups, salads and baked goods. Brandon and Meredith tweak the menu; occasional live jazz and changing artworks enliven the scene. Tom calls himself a “frustrated artist,” and his own paintings often decorate the Boiler Room’s walls. The artistic bent runs in the family, Meredith, who just relocated to Sherman from Louisville, Kentucky, is a graphics designer and art publisher.

When he got the chance, Tom acquired an old store on Jones Street, across from the Steam Laundry. Brandon lives upstairs, and Tom eyes a shed in back for an art studio. The adjacent working-class neighborhood, which in the 1900s supplied the laundry’s workers, is filling up with lawyers’ offices. The coffee house reinforces civic efforts to bring new life to downtown.

With the Boiler Room up and running and Brandon “doing great,” Karen started to relax. Then, in May 2006, Tom took her to see the fire station. “It was the saddest building—a dirty, awful mess,” she recalled. “But when we opened the front door, just the windows on three sides let me know it was going to be a great place. We felt totally at home from the day we moved in.”

Fire Station No. 2 was built on Willow Street in 1913 to serve East Sherman. In those days, horses occupied the first floor. Firemen slept upstairs during on-duty days and went home for off-duty days. Many lived nearby. The station served as a kind of community center for the neighborhood, a place where wayward boys were mentored, men played dominoes or spun tall tales, and wives stopped by with food or gossip. People came here to vote, and schoolchildren slid down the fire pole during Fire Prevention Week tours. The station and the neighborhood are deeply entwined in local memory.

Tom and Karen occupied their new home in February 2007. “A big asset with living here is the neighborhood, which we just love,” Tom said. A neighbor brought a wonderful Mexican dinner the first night. A lawyer from down the street, whom they had never met, gave them a framed vintage postcard depicting the station. Firemen and neighbors stopped by to inspect the renovation, share memories, and thank the couple for giving this much-loved building a new life.

Tom enjoys walking the dogs and riding his motorcycle in this ethnically diverse area. Among his and Karen’s ordinary pleasures are eating at nearby Tito’s Tacos and stocking up at Guerrero’s Panaderia and Grocery. “We love Mexico, and we figure that living here is as close to San Miguel as we are going to get,” Tom joked.

“You don’t realize the life of a neighborhood until you’re in it,” Karen said.

“There are all these families, Fielder Park, the steeple of Key Memorial Methodist Church lit up at night, the trains. Austin College is so close. It’s a beautiful campus.”

A few blocks away from the Shields home, Willow intersects Brockett Street. The City of Sherman has earmarked Brockett for beautification as a major corridor connecting Austin College and downtown. “All these little houses have so much potential,” said. Karen. “We hope young couples will see that they don’t have to buy a tract home with a huge debt to have a nice lifestyle. Or older couples like us, downsizing.”

If a football injury defined Tom’s young adulthood, maybe another life altering experience defined his middle age. In the fall of 1999, with the children grown and off on their own journeys, he and Karen asked themselves, “What are we going to do for the rest of our lives?” A few months later, Tom went to Cuba on a church mission trip.

“Suddenly I woke up to the fact that there was a whole world out there that I had never dreamed of. I wanted to get involved.” This epiphany, Tom feels, opened him to ways of thinking and living “outside the box.” He has returned to Cuba several times a year since then. He also volunteers with a friend’s medical clinic in Mexico.

Karen sees the twists and turns of their lives as circular: “We’ve been blessed, and in return we can make a difference in people’s lives. Then we’re blessed again. I like things with a story.”

Among the blessings is Bud Newman, who for decades has owned the barbershop across the street from the fire station. Now he’s sold Tom and Karen his building, to insure that it is respected and used appropriately in the future. And Meredith Shields just bought the cottage next to the barbershop.

I’ll tell you the greatest blessing, though,” Tom said. “I married a woman who is willing to step out into the unknown when it feels right.” He and Karen smile at each other across a living room where horses once munched oats.

Noel Barrick, AIA, a 1966 graduate of Sherman High School, was the principal-in charge and the project manager for the new Texoma Medical Center in Denison.

You’re crazy!” That was Karen’s reaction when her husband, Tom Shields, said he wanted to leave their comfortable home in far West Sherman to live in a long-abandoned fire station near Austin College. But she’d had a similar reaction in 1985, when he wanted to leave a picturesque Dallas residence and raise their kids in a small town.

While the term “Renaissance Man” is often overused, Edward Michael “Mike” Southerland came close if not having fully achieved such a recognition among his many friends. Edward Southerland, known to family members and close friends as Mike but addressed as Edward by those who followed his writings in various local publications over the past 18 […]