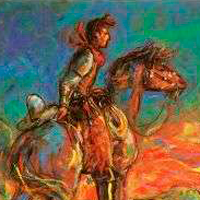 Spence Hardie grew up in the years after the Civil War wanting to be a cowboy. His family ranched in Montague County near Saint Jo not far from the point where the Chisholm Trail crossed the Red River from Texas into Oklahoma. Born in 1875, Spence learned to ride as soon as he could walk. At five years of age, Hardie later recalled, he rode the line and saved his “father from having to hire more cow hands by riding the fence and repairing the breaks.” Young Spence spent his teenage years working cattle and listening to stories of the great trail drives that had passed near the family ranch.

The saddle was for him as a young man. Being a cowboy remained in his blood, even after the Hardie family moved to Dallas. Nonetheless, Spence’s parents had higher hopes for his future than a life to be lived on horseback. Accordingly, they sent him to Austin College where in the fall of 1891 he became a hard-working freshman and a popular young man among his student peers. He read Cicero, studied Xenophon in the original Greek, mastered the intricacies of Algebra, and excelled in a course called Mental and Moral Philosophy taught by the college’s president Samuel M. Luckett.

Hardie also brought his saddle and horse tack with him to Sherman. At the first opportunity when free from the daily rigors of his studies, Spence rode down to the Gunter Ranch then located in rural southwestern Grayson County about twenty miles from the Austin College campus. Spence was acquainted with the owner, famed Texas ranchman Colonel Jonathan Gunter, because his older brother John T. Hardie was engaged to the rancher’s only daughter, Eula. Would Colonel Gunter, universally known to all Texas by his nickname “Jot,” hire him as a part-time cowboy? Spence could work in the free time around his Austin College studies and also on summer vacations. Perhaps intrigued by the prospect of a college student cowboy, Jot Gunter agreed and hired the young man. “I got a part-time job on old Jot Gunter’s Ranch,” Spence recalled years later, “and worked full time while on my vacations from the college.”

By the early 1890s, the Gunter ranching operations (whose livestock carried the famous T-Anchor brand) had become one of the best-known and most profitable cattle companies in the Lone Star State. Gunter had come to Texas from Georgia as a young man. After service in the Confederate army, he studied law in the office of Oran M. Roberts, who became a life-long friend and later a Governor of Texas. After winning his law license, Gunter moved to Sherman in the 1870s and went into a ranching partnership with William B. Munson of Denison. Gunter and Munson invested in ranch lands across north Texas and in the Panhandle, including a large division surrounding what would become the town of Gunter in Grayson County, a place that initially served as the outfit’s local headquarters. Jot was the ranch boss there.

It was at Gunter’s Grayson County ranch that Spence Hardie worked as a cowboy during his Austin College years, as he put it, “playing nurse to old Colonel Jot Gunter’s cattle and busting hosses for him.” Hardie’s experiences as a Grayson County cowboy in the 1890s would have been lost to history had it not been for a government program that occurred almost fifty years later, the Federal Writer’s Project of the Works Progress Administration. This New Deal agency sponsored an oral history project in the late 1930s that interviewed hundreds of former cowboys and ranchers, all of them elderly, along with women and children who had lived in the ranch country, about their lives on the late nineteenth-century cattle frontier a generation earlier.

By then a man in his sixties and retired, Spence met with W.P.A. interviewer Woody Phillips. Hardie provided the Federal Writer’s Project with a fascinating and colorful remembrance of his youthful years spent in the Red River region as a cowboy. In the process, Spence had much to say about being a cowboy in the closing days of the open range before barbed wire encircled most Texas ranches. In that regard, he recalled that the Gunter Ranch, over nine miles wide and which ran about 8,000 head of cattle, was unfenced except for the enclosed pastures where Jot kept the large numbers of horses he raised for sale to the general Texas ranch market. The T-Anchor branded cattle roamed free.

Hardie fondly remembered that, once hired by Gunter, he had to pick his remuda of horses from the ranch’s unbroken stock. Each cowboy on the place had from six to eight mounts in his remuda, and only the particular individual to whom these cow ponies had been assigned could ride them. “Each rider broke his personal mounts in as he needed them,” Spence related, and “since I needed one, I broke in a hoss I named Blue.” This became his favorite “because he made a good herd hoss,” even though he was “leery of branding work.” Hardie was proud of the care he gave his horses. Later, after he finished at Austin College and quit the ranch, he recalled: “I had to give up my string up when I left, and Old Blue made an outlaw before he’d let another man ride him.”

Spence also carried with him memories of the biting cold winters in the region. “We would simply freeze right through to the marrow,” he recalled about working cattle in the winter months. Sometimes, the temperature could be downright dangerous. “If one of us happened to be caught away from the ranch headquarters at night,” he noted, “we’d build two fires, one on each side of us. When we laid down, we’d move one fire over and lay down on the hot spot the fire was on.”

The heat of summer could be dangerous in its own way too. One blistering summer day, Spence and other cowboys were returning to the Gunter ranch on horseback from Sherman, where they had been sent to purchase supplies, including a large number of kitchen matches. They packed the matches in the saddle bags of a cowboy nicknamed “Tups.” The sweltering heat apparently set the matches ablaze and “put his bronc to pitching wildly.” “Well,” Spence laughingly recalled, “that was as pretty an exhibition of riding as I ever saw. Tups stayed on the hoss and got those burning matches from the pocket at the same time.”

Hardie participated in breaking one of the largest strings of untamed horses that Gunter ever shipped to his ranch. “The Colonel bought 500 head of wild hosses from the Kenedy Ranch, a part of the famous King Ranch in south Texas,” Spence remembered. Packed into railroad cars for the trip to Grayson County, Gunter decided to offload the horses on the siding at Howe, located some fifteen miles east of the ranch headquarters. There they would be put in temporary corrals, broken by the cowboys, and then ridden back to the ranch as they became saddle ready. According to Spence, “all the hoss busters were called out for the occasion. It happened to be on a Sunday, but there was no Sunday school in Howe that day because everybody turned out to see the show.”

And what a show it was for the people of Howe with five hundred horses pawing, bucking, snorting, and trying to jump the fences. Hardie observed of the horses that “they were so wild because they’d seen only a few men on horseback and never a man on foot. A man on foot put them to pitching in earnest and trying to climb the corral walls.” It proved to be hard work for the cowboys to break so many horses. “Of course,” Spence explained, “it took several weeks to get them all to the ranch because they had to be broke a little to herd. At that, about twenty of them got away and we were over a week rounding them up. Two of them we never got. I guess they’re still running.”

Spence Hardie finished at Austin College and left the Gunter Ranch behind. Although he thereafter sometimes raised cattle on the side “and returned to the range” every chance he got, Hardie passed most of his life as a banker. He retired in the early 1930s from being a bank president in Guymon, Oklahoma. He lived in Fort Worth during his final years.

Jot Gunter moved away from Grayson County in 1901, having sold his ranching interests to build a luxurious hotel in San Antonio where he spent the remainder of his life as a successful businessman. The Gunter Hotel still stands today in the Alamo City, welcoming guests as it has for over a century in testimony to the business acumen of a great Texas ranchman who earned much of his fortune in Grayson County. Spence Hardie’s enduring testament is found today in the vaults of the Library of Congress in Washington, D.C., where rests the W.P.A. interview he gave in the late 1930s. These reminiscences have been consulted over the last seventy years by dozens of historians interested in cowboy life along the Red River Valley during the 1890s.

On Being a Cowboy

By most accounts the business of photographing kids on ponies began not long after the camera was invented. There are tintypes in museums with faded images of boys and girls astride, usually Shetland horses.