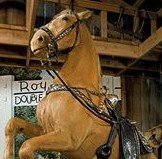 George Piper, an agent with Steve Cook Realtors®, sent an email to a few friends this week with sad news about the last round up for Roy Rogers‘s beloved horse Trigger. Trigger is just one of the items to be auctioned off by Christie’s during a very public sale in mid-July. Texoma has a special connection with the “King of the Cowboys.” Roy Rogers was a very visible partner in the Yellow Jacket wooden boat company that began and ended in Denison back in the 60s.

UPDATE:  The Christie’s auction was held on July14-15, 2010. Click here to see the results and what some of the items brought at auction.

Roy’s trusty and beloved steed Trigger was stuffed and mounted for the Roy Rogers and Dale Evans Museum in Apple Valley, California. The museum, opened in 1967, was relocated to nearby Victorville, California in 1976, then to Branson, Missouri in 2003. Roy died in 1998, followed by Dale Evans in 2001. The museum closed in December 2009 after some hard times.

The entire museum contents, over 1,000 lots from Trigger to Nellybelle (the jeep they used on their TV ranch) is expected to bring nearly $2 million at auction. The proceeds will go to the Rogers family trust.

In his email, Piper wrote:

As a boy in New Hampshire my hero was Roy Rogers (had sixguns, lunch pail, cowboy hat with chin strap and whistle). In Roy′s movies he always righted wrongs, and finished each one with a song. Today (July 9) on CNN they announced that Christie′s auction house is selling Trigger.
It is a sad day when a hero’s remains are sold to the highest bidder.

Chrisite’s is selling the entire Roy Rogers and Dale Evans Museum estate in a two day extravaganza that will surely dominate the news on its July 14-15 sale days.

In the late 80s I was visiting a radio station in Victorville, California. My partner and I were looking to buy it and the deal was so close to being done that we actually got a Realtor® to show us some homes in the area.

If you visited  Victorville in San Bernardino County, California a visit to the Roy Rogers and Dale Evans Museum was a must. After lunch we drove our rental car over to the museum. Honestly, I was never a huge Roy Rogers fan, but he is a legend by any popular culture standard, and that’s a gold standard for boomers like George Piper.

We knew the story about Trigger, the golden Palomino horse that Roy rode in movies and on TV. There he was, stuffed and rearing up proudly in the center of the foyer. We strode around the exhibits and marveled at just how many memories were revived. There were only a handful of visitors on this spring weekday. If you know where Victorville is located then you know it’s not exactly on the main road to anywhere.

From behind me an older gentleman—a docent perhaps?—asked if we were first time visitors. There stood Roy Rogers himself. He reached out a hand and shook mine and I almost peed my pants I was so excited. Remember me? The not so huge fan?

At 6 ft. 2 in. Roy Rogers was imposing. I remember his hand being soft and warm to the touch. He had a gentle handshake, not the macho man grab, hold, and squeeze you might expect from a western hero.

The first 30 seconds of the conversation remains lost. The buzzing in my ears permanently blacked out any recollection. But I eventually settled and we had a polite, short exchange. He patted me on the shoulder (like the little boy I felt like right then), and moved on to the next visitor. I was later told that he often made the rounds to the delight of many a young (and old) cowboy and cowgirl.

My friend George Piper makes a good point in his disappointment that this hero’s relics are being sold off. But if the museum is being closed and no one was willing to retain the collection en massè for all to see, then what better place than on the shelves of his fans who acquire the items.

In the same way that George may still covet his battered Roy Rogers and Dale Evans lunchbox, or comic book, or other memorabilia, dozens of other fans will delight once again to seeing, touching, and holding close one of those personal items once revered by Roy himself.

Share your own memories of Roy Rogers and Dale Evans. Scroll to the bottom of this page and Make  Comment.

2 thoughts on “Roy and Trigger”