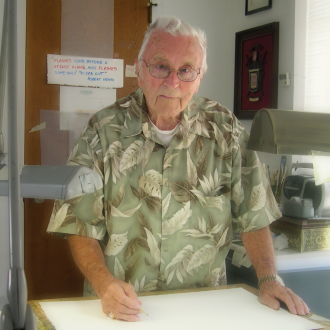 Schafer’s mother encouraged his talent and he honed it. In the early 1930s he attended the Reinike Academy of Fine Arts in New Orleans. “New Orleans was a ball, although the heat and cockroaches got to me,” Schafer said. “I still enjoyed every minute of it. I met a lot of nice people and learned quite a bit from my prof, Charles Reinike.”

As the Great Depression swept across America, the levelheaded Schafer decided his artistic dream might satisfy his soul but would not do much for his bank account, so he went into advertising, devoting fifty-three years to that profession in Dallas.

When his wife died in 1992, he retired and channeled his energy into watercolors. “After I started painting, I was doing three a day. I had all these ideas,” he said. He finishes three a week now, with more than two hundred pieces completed.

Schafer paints lighthouses, seascapes, and landscapes. There is peacefulness in his work, in the motion of the waves, the softness of clouds dotting the sky. That is what he hopes people take with them when they see his work. “I think of it as a happy story. I’m a happy guy, I don’t have any bad thoughts and I don’t want to give any,” he said.

Watercolors present special challenges for the artist. “I had to learn how to make water look wet in my paintings, and that’s very difficult. I’m still studying that,” he said. “Now I’ve taken an interest in clouds, and it’s hard to make them look as soft as they are.”

The nonagenarian artist says slowing down is not part of his plan. “Painting is the best thing the good Lord ever did for me. A lot of old folks retire and have nothing to do, so they think about themselves, and the first thing you know, they’re gone. Every morning I get up, I have a painting on the board and think of how am I going to approach it.”

Schafer, who lives with his daughter in Whitesboro, is a member of the Creative Arts Center in Bonham. He has won dozens of awards, and has had his work featured in galleries, businesses and homes throughout the country.