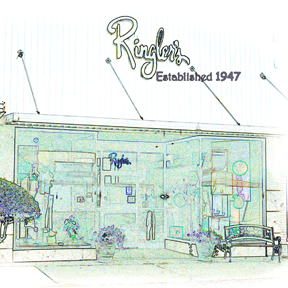 In the early 1930s, Louis Ringler emigrated from his native Poland to seek a new life in America. He met his wife Esther, who was Austrian by birth, in New York City, where they were married. When their son Herman was born, Louis and Esther decided to seek their fortunes outside the big city. A cousin, Oscar Tannenbaum, whispered “retail” in their ears and in the best tradition of Horace Greely pointed them west.

In 1946, the Ringlers’ dream took root in Denison when they bought the Cinderella Shoppe at 304 Main Street. The shop flourished, as the business shrewdness and personal charm of Louis combined with Esther’s exquisite taste and flair for fashion. Their motto became “Exclusive, but not Expensive.” Designer labels from New York and Kansas City were readily available.

In outfits from Ringler’s, women could be confident they would look their best, and the personal service was top-notch. The shop became a gathering place for those seeking the latest fashion news. Regular customers who needed last-minute Christmas gifts could always call on Christmas Eve and be assured the doors of Ringlers would remain open for them to pick up their splendidly wrapped gift. They could also count on help with unexpected events, such as special clothing for funerals.

Customers loyal to certain brand labels were guaranteed a personal telephone call alerting them to new arrivals they might like. Husbands depended on Ringler’s for a hint when buying gifts for special occasions.

Son Herman Ringler was enrolled at the University of Texas when Louis Ringler died in 1959, leaving Esther in charge of the business. At his mother’s insistence, the son completed his degree before taking charge of the store in 1964. In addition to sales experience from his parents, Ringler had learned much from his mentor, John Gies, who worked at another Denison bellwether retailer, Lilly’s Department Store on Main Street.

When Esther Ringler died in 1980, Herman became the sole proprietor of Ringler’s. He went on to become a driving force and advocate of retail on Denison’s Main Street. He also aided many charitable and civic organizations and served six years on the Denison City Council.

To continue the Ringler’s tradition, he traveled to the fashion markets of New York and Los Angeles, as well as Dallas. He was always looking for the new “up and coming” designers. When Ringler decided to add the Brighton line of leather goods to his inventory he traveled to China to see the production plant.

He recalled the frightening Christmas Eve in 1989 when Bealls Department Store just across the street from Ringler’s burned. “All of Denison watched and waited helplessly as a portion of their beloved Main Street was destroyed. We watched silently as the wind direction shaped the future of business on Main Street.”

Ringler credits the huge presence of the Katy Railroad in the early years for bringing customers to Denison. This led to an expansion of business on the north side of the three hundred block of Main Street and established Ringer’s as an anchor store in downtown. “Every pay day, downtown Denison was buzzing with activity, as the Katy Railroad employees shopped on Main Street,” he said, and reflected that Denison was also a strong draw for people from southern Oklahoma.

The success of Ringler’s can be outlined as “generational shopping.” The store’s history and successful longevity was always based on customer relationships. “Little girls who came with their mothers and played in the special children’s toy box at Ringler’s grew up and became the next generation of Ringler’s shoppers. Later they would bring their own little girls to play in that same toy box,” said Ringler. This was the life cycle of the extended Ringler’s family, and those families transitioned through school startings, graduations, marriages, anniversaries, birthdays, and holidays.

There was even a customer log kept, recording who bought what. “This prevented two women showing up in the same outfit at the same event,” said Ringler with a smile. “This was just one of the many traditional and personal amenities we provided at Ringler’s.”

Women depended on Herman Ringler and his staff to provide clothing that was fashionable and flattering, and Ringler’s Trunk Shows offered women a peek at new lines of fashionable clothing. Luncheons became a hallmark of entertainment every other month, and customers were invited to Ladies’ Appreciation Day, where they enjoyed lunch, visiting, and viewing the latest designs.

Coffee, Cokes, and Hershey Kisses were always available for Ringler’s shoppers. An occasional “special” drink was available on request. Tylene Shires worked for Ringler’s for more than thirty-six years, and her special Holiday Punch became a Denison tradition of sorts at Christmas. The punch recipe called for vodka, peach schnapps, orange juice and pineapple juice, and it was the consensus of customers and Ringler alike that, “The punch served as motivation for the gentlemen shoppers on Christmas Eve.”

“Tylene’s dedication and enthusiasm were instrumental to the success of our store,” said Ringler. “She was most effective as a personal shopper for her clientele who depended on her for their wardrobe selections. She often made ‘house calls’ and ‘closet make-overs, taking selected items to her customer’s home.”

Ringler’s published a monthly newsletter, which provided ladies a wealth of information about the world of fashion and what was available at the store. Recipes printed in the newsletter became popular with customers, as they shared their favorite dishes.

Ellen Saunders, a regular shopper said, “One thing about Ringler’s, it was always entertaining. The people who worked there were my friends. Going to Ringler’s became a social hour as well as shopping trip.”

Kay Skelton and Jimmie Lee Mobley, both of Denison, were quick to declare their loyalty to Ringler’s. Kay Skelton said when she arrived in Denison almost forty years ago, she was told Ringler’s was the place to go if she needed new clothes. “Little did I know that I would not only find something new but also fashionable clothing in the latest designs. I also found lasting friendships that unlike the changing fashion styles have lasted through the years.”

Skelton and Mobley dubbed Herman Ringler “Merchant of Main Street.” “He welcomed everyone who entered the store,” said Skelton. “He made everyone feel special and he instantly became our friend. We became friends as well as customers of all the girls on Herman’s staff, Tylene Shires, Connie White, Gail Broyles, and Helen Wright.

And Mobley recalled, “Regardless of our needs, they helped us with our selections, counseled us, and gave us confidence when we walked out of the store with our purchases. We moved from youth to middle age to mature women, and the history of our lives has been written in part by what we wore. Ringler’s literally became a part of the fabric of our lives.”

Jo Ann Osborn of Sherman was another regular customer of Ringler’s. “I shopped at Ringler’s because of the service and the unique shopping experience. I always felt as if I had my own personal shopper and advisor. I could always trust the staff’s judgment in helping me coordinate my wardrobe; and I always felt good about how I looked. I could depend on their guidance regarding the latest fashion trends.”

From the fitted look and the loose look, the full skirts and the pencil skirts, soft and feminine, severe and tailored, high waist and low waist, Ringler’s was there to help their customers with the latest fashion and the newest look. For this reason, Helen Wright of Denison was one of Ringler’s loyal customers. “You could always get a unique and different outfit for your special occasion at Ringler’s. They always carried nice clothing, and the personal service was the greatest.”

Then of course, there was Herman Ringler himself. He was always upbeat. He was there to help the customer get that perfect outfit, even if it required a special order and an overnight delivery. With just a telephone call and a description of a special event, a customer would find at least ten possible outfits in just her size waiting for her when she arrived. It was part of Ringler’s service to encourage a customer to take items home, try them on, and then make their selection. “It was not about the sale, but providing the perfect fashion creation from head to toe,” he said.

Julia Ringler was a speech therapist and teacher for children with special needs for more than thirty years in Denison. Through the years, she has been her husband’s strongest supporter. “Julia’s legacy at Ringler’s was allowing me my many lady friends, who she referred to as ‘Herman’s Harem.’ Many times in the evenings, when I was on the phone talking fashion, Julia was patiently waiting.”

After sixty years, Ringler’s closed on August 5, 2006. “There was a lot of soul searching before I made the decision to close my business,” said Ringler, Retail held no fascination for our three children, Ronda, Rochelle, and Bob. I was able to retire on my own terms and bring to a close that part of my life. I wrote Ringler’s last chapter.
“My parents gave me a treasured legacy. My goal when I began the business was to honor that legacy and tradition and thereby honor their memory. I felt fulfilled by closing that chapter and am looking forward to my next adventure.”

Ringler’s, like Elinor’s, was about more than clothes, at least Herman Ringler thought so. “Although we sold clothes, what we really sold was a sense of ‘feeling good’ about oneself. I felt we brought glitz and bling to Main Street, to downtown Denison.”

Things I Learned at the Movies