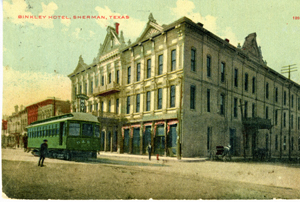 It is called deltiology, from the Greek for “writing tablet.” It is the collecting of postcards, and it is one of the three most popular collecting hobbies in the world. Collecting stamps and coins are the other two. There is something a bit more personal about a postcard. It’s the short note, the shared sentiment—“Having a wonderful time, wish you were here”—that provides a tangible human connection.

Michael and Betty Mitchell of Sherman have been collecting postcards for twenty years, along with bottles, matchbooks, arrowheads, toys, sheet music, and more. Their house is a museum of the commonplace things that often go unnoticed, but which take on far greater import when collected in large numbers. Ten matchbooks aren’t much. Thousands of matchbooks are amazing and represent an important insight into the way our society once functioned. So do postcards.

“About twenty years ago, my mother-in-law was moving into a nursing home,” said Mitchell. “She had a collection of cards that had been sent to her mother, Betty’s grandmother, by a suitor who took a European trip in 1903. Every day, he sent her a card from somewhere in Europe,” said Mitchell. “They are beautiful cards, far more colorful that cards from the same time period in the United States. They just fascinated me.”
The short-form billet-doux sent from Europe to a girl in Texas didn’t keep the suitor on her mind, however, as Mitchell later learned. “She got these cards every day, and they went through most of the summer until September. Then, in November, I’ve got two cards mailed to this lady from Washington, D.C. and one from St. Louis from Wesson G. Kyle. The first suitor didn’t come back soon enough, and she married Wesson G. Kyle. It’s so interesting the way it all ties in.”

Mitchell’s mother-in-law gave him the collection of European cards, and, his interest piqued, he started rummaging through estate sales looking for more. “At first, I would go to an estate sale and just make an offer for everything they had, and I got other collections that were interesting,” he said. “I’ve got a collection of the state capitol, the state flag, and the governor’s mansion for every state in the union.”

The state collection was not complete when he got it, so Mitchell went on the scout for the missing elements. In many ways, that is the real joy of collecting things. It’s all about the hunt, and the thrill of coming across a piece of the puzzle is satisfying indeed.

“After a while, I started zeroing in on Texas and on Sherman, Denison, and Woodlake,” he said, opening a folder filled with old post cards. Each card is neatly labeled. “If they’re to somebody and from somebody, I’ll put it on there. A lot of these are from family estates, and I think it’s interesting. Like this card, it’s from W. H. Lucas. He was grocer in Sherman in the early 1900s. I have all his family cards. Because I collect cards, they just let me have them. They were very generous.”

There is more to the cards than just the pictures, of course. Just as Mitchell was able to learn something about Sherman at the turn of the last century from the Lucas cards, others can offer clues as to who was who, what was what, and where was where in a community’s history.

Another popular form of post cards was the novelty card. Just about anything out of the ordinary qualified, from cards with attachments to joke cards and cards in unusual shapes. “There were a lot of them, so many that they don’t have a lot of value to collectors today,” said Mitchell.

In the 1930s, “saucy” cartoon cards became very popular, reaching sales of sixteen million a year. Their slightly risqué humor, built around innuendo and double entendres, was softened enough by the cartoon feel to get past all but the most prudish censors. And what about the infamous “French” post cards? They first appeared in 1910, but the cards, most of which would today be classified “soft-core” pornography, were rarely if ever put in the mail. To do so would have brought the postal inspectors to the door.

While the earliest cards in Mitchell’s collection are perhaps the most valuable to collectors, his Texas cards, with an emphasis on Sherman, Denison and Woodlake, are the historical gems. The cards illustrate what people were proud of in their communities, what they thought important and worthy of showing off. The postcard images of days past may be filtered with a rose colored lens, but that’s all right. So are many of our memories.

This story first appeared in the Texoma Living! Sept-Oct 2009 issue.