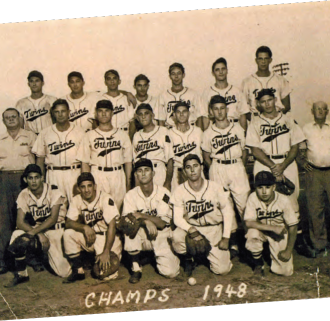 These days, when players who struggle to stay just above the Mendoza Line (a .200 batting average) make millions and still complain, it is difficult to imagine how important baseball was to the fabric of small-town America in days gone by. It was the most important recreation most folks had.

Texas has been home to more minor league teams than any other state in the country. The AA Texas League was the most famous, of course. It started as the State Base Ball League in 1888, with teams in Austin, Dallas, Fort Worth, Galveston, Houston, and San Antonio. Sherman fielded a Texas League team in 1895, led by pitcher Lee Garvin, a local boy who went on to the Pittsburgh Pirates.

The league operated by fits and starts until 1902 and suspended play during World War II, but weathering all the vicissitudes that have plagued the bush leagues over the years, the Texas League responded each spring to the umpire’s cry of “Play ball!”. The Yankees of the Texas League were from Fort Worth. The Panthers won six straight pennants in the early 20s and produced top teams, under different nicknames, for years.

During those years, long before television brought the big leagues into every home, Texas League fans cheered heroes on the rise, men like Tris Speaker, Al Simmons, Hank Greenburg, Dizzy Dean, and Duke Snider. Each fall focused attention on the Dixie Series, between the champions of the Texas League and the Southern Association.

Texas League was the top of the minor league pyramid in the state; dozens of lesser leagues that alternatively rose and fell in the smaller communities bolstered it. The East Texas League, the Rio Grande Valley League, the Central Texas Trolley League, the Longhorn and the Big State Leagues came and went.

The class D Texas-Oklahoma League, which operated in 1922, was the venue for the famed Bonham Boogers, surely one of the most unusual names ever tacked on a baseball team. Unusual, but no less improbable than the Santa Rosa Prune Pickers, the Des Moines Undertakers, the Nevada Lunatics, the Joliet Convicts, or the Lebanon Pretzel Eaters of the same era.

The Boogers, who also might have been the “Bingers,” fought for the 1922 T-O pennant against the Sherman Red Sox, the Greenville Togs, the Paris Snappers, the Ardmore Producers, the Mexia Gushers, the Cleburne Scouts, and the Corsicana Busters. A group from Denison tried to buy out the Bonham team in mid-season, but the deal fell through.

The importance of baseball in towns such as Sherman or Denison, in a time before instant entertainment attached us to the living room sofa, is hard to imagine. Accounts of the games were the lead sports stories every day, and the coverage easily eclipsed that of the big leagues. In addition to the towns’ minor league team, company and semi-pro teams were abundant. A summer weekend might find the Trenton All-Stars taking on the boys from the Frisco shops, and the papers would carry schedules for business or industrial team games.

Texoma’s most successful minor league team played as the Sherman-Denison Twins in the post-war 40s and early 50s. The club spent eight years representing the twin cities and won the class B Big State League pennant in 1948, topping Wichita Falls in the playoffs for the title.

The Twins went 94-51 to win the regular season, but manager Joe Rodriguez, a Cuban national, left the club to return to his home country before the playoffs started. Second sacker Ray Taylor took the helm and guided the Twins to their one and only title.

Starting in the class C East Texas in 1946, the Twins counted on their starting roster former White Sox pitcher Monty Stratton. Stratton’s return to baseball following a hunting accident that cost him a leg was the subject of a 1949 movie starring James Stewart and June Alyson. Stratton was 18-8 for the Twins in ’46.

Many of the Twins were from North Texas, and local interests owned the franchise. The club played in Twins Park, on the Interurban line, on Baker Street in Sherman, near the present day VFW building. They finished third in 1951 and the next year dropped down to play in the class D Sooner State League, the only Texas club in the mix.

By 1953, the box in the living room and the antennas on the rooftops were bringing the big leagues into the homes of baseball fans in small-town America, and the minor leagues started a slide that seemed as if it would never stop. Leagues contracted, teams dissolved; few teams, other than those owned outright by major league clubs stayed in business.

But minor league ball has made a comeback of late, and a few years ago there was even talk of a new team for Texoma. That hasn’t happened yet, but on Little League diamonds and high school fields and in the aspirations of hundreds of minor league players who dream the dream, the game will abide.

There is no shortage of million-dollar-plus homes along the shores of Lake Texoma. Here’s an inside look.