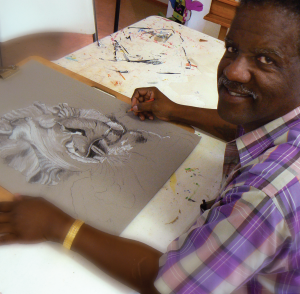 Give Philip Blander a black pencil, a white pencil, a sheet of gray paper, and he will take your breath away. The 59-year-old artist has done photorealistic portraits so lifelike he has people insisting that his work was not drawn. “One woman looked at a portrait I did and argued with me, telling me that it was a photograph! I love when that happens,” he said.

Blander’s artistic flame was fanned from a young age in New Orleans. “I can remember sneaking off and going to the French Quarter,” he said. “I would sit there and watch the artists paint on Jackson Square. I fantasized about being one of them.” He continued to draw on his own and eventually went into the armed forces. After the service, he went home and back to school to earn an Associate’s Degree in Fine Arts.

When Hurricane Katrina struck the New Orleans area in 2005, Blander was one of the hardy souls who did not leave, and he saw floodwaters swallow much of the city. “After ten hours, the water was so deep I didn’t have a bed to sleep in, and I tried to lie on the dresser. After a while, I didn’t even have the dresser, so I had to swim out of there. I swam to an overpass, and that’s where I spent the next two nights.

Blander made his way to Texas along with a busload of other evacuees. Several weeks later, he found himself at the Veteran’s Administration Hospital in Bonham. While he was there, his art was his release. He created a portrait of a toddler he had seen on the cover of Newsweek magazine. “It was a beautiful little girl with a tear running down her cheek. She was running from Katrina, also,” he said.

He entered the drawing into the VA arts and crafts show and won first place. It then went on to the VA national competition where his work won second place.

Though he has received accolades, making a living from art isn’t possible right now. “It’s pretty difficult to get my work out there because I wasn’t connected with the artist’s circle before. Since I’ve been here in Bonham, I got connected with the Creative Arts Center.”

He said the Center’s former director, Karen White, did quite a bit to help him out. “When I was coming up, no one thought anything of me and art. It didn’t make money,” he said. “Karen sees potential, so she would say ‘we have a show coming up. We need something from you.’ ”

With that kind of support, he hopes eventually to draw seven days a week for nine months, take his art back to the Big Easy to sell, and then take a couple months vacation before he starts the process again.