© This article first appeared in the Summer 2009 issue of Texoma Living! Magazine.
Photographed by Anne-Marie Shumate for Lasting Images Photography.

Diana Cosby could be a heroine in one of her best-selling romance novels. She looks the part, long hair the color of single malt Scotch, bright eyes and an easy smile. There is the heroine’s spirit too, a spirit that has carried Cosby all over the world. But it took her retirement from the Navy—she was a chief meteorologist and oceanographer—to bring the passion for writing romance to the surface.

Now settled in Pottsboro, after the thirty-first move in her life, she has found success delving into the world of medieval Scotland with tales of brave, brawny brothers and fair, strong-willed women who are every bit as brave as their men. The move to North Texas and being near family has fanned Cosby’s creative fires, even as the setting here has given her something calming, something she has not had before—roots.

This is where Cosby’s husband Bob grew up and where his family members still live. “I love North Texas,” Cosby said. “I love being around family and being around to help family instead of being on the other side of the world.” The Cosbys have three children. Their oldest son is in the Marines, a daughter attends college in Virginia, and their youngest son will be a senior next year at Pottsboro High School.

Though North Texas is a long way from the world of Scotland’s hero William Wallace and Cosby’s own fictional heroes, the MacGruder brothers, distance in time and location has not hindered her desire to learn all she can about a time of turmoil that captured her imagination upon seeing the 1995 Mel Gibson movie “Braveheart.” “I love the political unrest and the cause of the Braveheart era,” Cosby said. “It’s Scotland’s fight for freedom. You have a power-seeking king. England was at war with France. It was just a huge time of unrest. Then you have William Wallace, whom the movie made into a huge hero, which he was.” 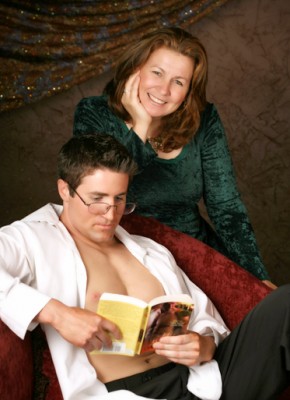 In her books, His Captive and His Woman, Cosby has taken Wallace’s true story of fighting and dying for Scotland’s independence and woven a backstory of characters as rich as Wallace. Brothers Seathan, Duncan, and Alexander MacGruder are Wallace supporters and have many an adventure, usually involving swordplay, that helps the cause, all while winning the love of their women.

Do not be fooled by the muscle, though. These brothers have tender hearts and a thirsty lust for their women. And the women lust right back at them. Brother Alexander meets Nichola, an Englishwoman, and makes her His Captive in the first book of the series. Duncan and his former fiancée, Isabel, are reunited in His Woman, a tale that weaves Wallace’s struggle to stay hidden from England’s King Edward I into a tale of rekindled passion between the former sweethearts. With Isabel’s whisky-colored hair, determination and compassion, it is not hard to relate the heroine to the heroine’s creator. To write accurately about the times, Cosby keeps a binder of photos, facts and terms ready. It is all information she has put together from any source she can get her hands on, including online classes about the era and about Scotland, and from her own extensive library. She plans a trip to Scotland next summer for more research. 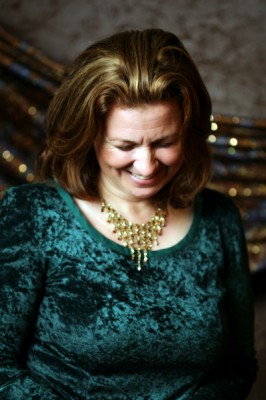 Cosby goes to another world while writing, but she finds the transition from 13th century Scotland to 21st century Texas an easy one. The sometimes mundane tasks of running a household give her the chance to savor the action in her novels. “When I get ready to write a scene that’s really intense and a lot is happening, I’ll get up and fold laundry or take the dog for a walk to savor the intensity,” Cosby said. “I get to enjoy the upheaval of the moment, the drama. That’s why people watch TV and movies and read books, for the entertainment. So for me when I write it, just knowing what’s coming and being in the thick of it, I want to savor it, that mayhem, just for a moment, then I write it.” Once written, her brain moves on past the scene. For mood music, she listens to soundtracks from “Braveheart” and “Rob Roy,” another medieval romance.

Two more books about the MacGruder brothers are in the works. The lass who steals Seathan MacGruder’s heart will be a bonny one indeed. He is the eldest and most dominant brother, so it will be challenging to find a woman who can stand toe to toe with him. And only time will tell what adventures await Patrik, an adopted MacGruder brother.

But Cosby does not plan to stay in the 13th century forever. Once established in the medieval historical romance category, she would like to venture into the present to write contemporary suspense romance thrillers on cold case profiling that may even be set in Dallas. With the good reviews the first two MacGruder novels have received, fans may call on her to stay in Scotland a while longer. The Romantic Times gave His Woman four stars, and it won four and one-half hearts from the Love, Romances & More website. The tantalizing male torso on the cover of His Woman led to a third place win in the historical category of the “Judge a Book by Its Cover” contest by the Romance Writers of America.

Writing was not what Cosby envisioned for herself while growing up, although she read Walter Farley’s The Black Stallion and many a Harlequin romance as a teenager. She describes her younger self as a quiet loner, afraid to attach herself to friends because her military family would just move away. “I don’t think writing entered anybody’s mind as a future for me, including me,” Cosby said. Her gypsy upbringing has translated into heroines who are lonesome souls, looking to find themselves or struggling to overcome challenges. “That plays off of always being the new kid, always struggling to fit in and overcome everyday challenges,” she said.

Cosby joined the Navy after high school for a job, and meteorology was the only choice that appealed to her. “Meteorology is neat. It’s very intuitive. It’s a gut thing. You can have all the charts in the world but you need to know the lay of the land to be good,” she said. One thing is for sure, any weather terms in her novels will be accurate. The Navy job turned into her career but she knew it was not the job that her heart was seeking. She kept reenlisting until she knew what it was in life she wanted to do. If you doubt the comparison between Cosby and a romance heroine, listen to this. For her last reenlistment, she traveled to the African desert and took her oath atop a camel. But after her retirement, she knew she wanted to write, even though she had never done anything like writing. In fact, after a creative writing class in Hawaii, she almost gave up. “It wasn’t pretty,” she said. 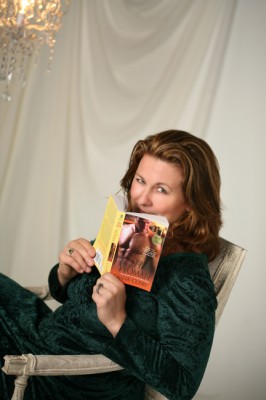 Forecasting weather all over the world has led Cosby to easily embrace other cultures, but it has killed the roots she might have put down with another career. “I wish I had roots like people who have grown up in the same town,” she said. “The sacrifice for world travel is no roots.” But she is not complaining, and she is working hard build a sense of heritage here.

“Every place is what you make it. It’s all about perspective,” she said. And while some may not find North Texas as exciting as, say, medieval Scotland, Cosby finds limitless things to do here. “Anything you’re interested in you can find someone who shares your passion, and especially with the Internet to connect with others. It’s up to you how far you want to go.” And, as Cosby pointed out, there is a direct flight from DFW Airport to Edinburgh—Scotland, not Texas.

Cosby’s upbringing also gave her a strong sense of giving back. “That’s very personal to me. I grew up with simple means, so if I can help someone in a bigger way, it’s a blessing.” And that she does. Currently, a portion of her royalties go to the National Trust for Scotland, a non-governmental agency that preserves Scotland’s history, its battlegrounds, and castles by buying the land and maintaining it. She also dreams of helping local agencies in the future, with a goal of sponsoring a house for Habitat for Humanity.

“That would be so amazing,” Cosby said. “It’s not about the money. It’s about making a positive difference in others’ lives. If I can make a positive difference in others’ lives or make them believe in themselves or strive for their dreams, it doesn’t get any better than that.” She has used her experience to speak to creative writing classes in Pottsboro schools, impressing on the students that each word matters. “Words put the reader into the story world. Words are powerful. Knowing that is something that will serve you through life.”

Whether on her own Facebook page or guest blogging on romance or other writers’ Web sites, Cosby is ever the encourager. She always thanks her fans and answers their inquiries. “It’s humbling,” she said. “I love hearing from readers and fans. It’s so easy to think ‘this is junk.’ When you get your book out there and you’re on pins and needles, for somebody to write, ‘that was really good’ is pretty amazing.” And she takes the time to encourage others to set goals, have dreams and believe in themselves. “You can’t achieve your dreams unless you have goals. Dreams are visions of what you can become. Everything you ever want in life is out there, you just have to look.”

Sounds like something the heroine of a romance novel would say.

Poinsettias are one of the longest-lasting blooming plants available to consumers. Here are the basic Do’s and Don’ts to keep yours alive and well throughout the year!