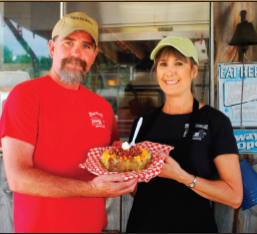 Darrell and Rebecca Harris just keep cooking and folks just keep coming back for more. Following the “if it ain’t broke, don’t fix it” adage, the Harrises haven’t changed much from our last review, but there are few new items on the menu. “We’ve got a new hamburger called the “Panhandler,” Darrell said. “It’s a sirloin burger with A1 Sauce®, and French fried onion, cheese and barbecue sauce.”

The Old Mining Camp makes a mean burger, but this is about barbecue, so we really ought to be talking about the brisket, pulled pork, and variations on the theme. “I’ve always loved barbecue, and I really like making it,” Darrell said. “I met an old man who showed Rebecca and me the ropes, and I thought it was something I could really do.”

Darrell’s super secret smoker is still off limits. It’s an idea and design he’s keeping to himself for now. But you’re more than welcome to try the results of his efforts. “See the ring,” he said, pointing to a pinkish smoke ring around the edge of a piece of sliced brisket. “It’s about a quarter of an inch, maybe more. You’ve got to have that to have the smoke flavor.”

While you can order a brisket or pulled pork sandwich or a barbecue plate, what sets the Old Mining Camp apart are the innovative things Darrell and Rebecca come up with to utilize their smoked meats. How about a Frisket? That’s a pile of fries topped with chopped brisket, onions, and whatever, the whatever being “what would you like?” Then there’s the Gold Digger, a sliced brisket sandwich with smoked sausage served with one of the two available red sauces or Harris’s version of brown gravy sauce.

At each place our judges called on, they looked for something special, something that set the menu apart. The choice at the Old Mining Camp was unanimous. It was the Big Baked Potato. Say what? Say you’ve had a baked potato. No you haven’t, at least not until you split a giant spud and fill it with butter, sour cream, chopped brisket, cheese and barbecue sauce. Now that’s a Big Baked Potato.