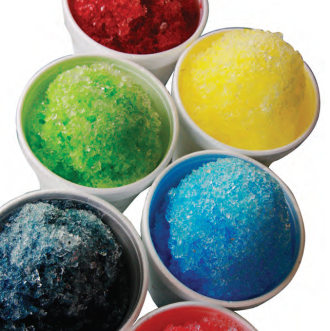 Sno cone stands are like robins; they herald the arrival of spring.

They start showing up around April, and then, as September wanes, they disappear, gone until next season.

The stands themselves are as varied as the flavors. They range from plastic palmfrond- shaded Hawaiian Ice emporiums to simple shacks with hand-lettered signs announcing their bill of fare. And today’s menu is far more varied than the basic strawberry, cherry, lemon-lime, orange, root beer, and coconut flavors of the past.

What is the favorite flavor? Hands down, at least in Texas, it is blue coconut. Why blue? “It’s a Texas thing,” says a New Orleans supplier of sno cone syrup. “You Texas people are crazy to think you’ve got to have that in blue.” Coconut syrup also comes in a clear version, but around here, that just won’t do.

Sno cones have jumped on the trendy low-carb, no-cal bandwagon too. All the stands we visited have a selection of sugarfree flavors, so you can have your treat and not feel guilty about it.

Another change from times past is the delivery system. Gone is the little paper cone, its place taken by various sizes of Styrofoam cups. It is a lot neater, but probably not as much fun, or as colorful. The paper cones were not very sturdy. They disintegrated quickly, and they leaked. Many a kid walked around all summer enveloped in a sticky iridescent aura from head to toe.

In the paper-cone era, sno cone connoisseurs developed a technique to heighten the experience and enhance the sugar rush. They used a straw to suck out the syrup in its pure state, undiluted by the melting ice. If no straws were available, the true believers bit the pointed end off the cone, bent over double, and swigged the syrup from the underside.

Of course, when the syrup was gone, the kid was left with a nothing save a clump of melting ice, and that is no fun. So what? No kid ever actually finished a sno cone. Long before the ball of ice was polished off it had a) lost its flavor and become boring, b) melted down to mush, causing the paper cone to disintegrate, c) been dropped on the ground or down the front a shirt or dress, d) been thrown at someone in retaliation for a variety of provocations, real or imagined.

Then there was the bug problem. The little neighborhood stands often sported a halo of yellow lights to ward off bugs. Yellow lights and sugar syrup draw all manner of flying things, so it was an unfortunate choice of décor. More than one little kid fought a losing battle with a yellow jacket or a wasp for possession of a sno cone. The insect buzzes, the kid swats, the rainbow ice falls out of the cone to the grass, the bugs chow down, and the kid cries until mama produces the price of another treat. There is a life lesson in there somewhere. 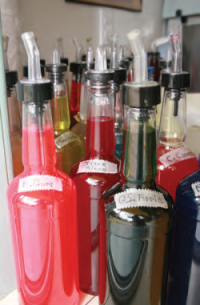