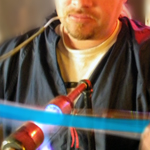 Artists who work in neon used to be found in most cities, but they have become fewer over the years. Jason Hammond, 38, who plies his skills for Native Signs and Lighting in Sherman, is one of only two neon sign makers currently working in Texoma.  He has been a glowing example of the neon art for over twenty years.

How did you get started in neon?

I worked at Young Electric Sign Company in Denver as a sign installer. The production manager moved me over to neon department because he thought I had a bit more of an artistic side to me. I got lucky really. They started training me, but it was two years before I really had it down. I never quit after that.

Neon is all done by hand. You start off with your pattern, which you actually lay out backward, because you make the sign upside down and in reverse. After you’ve got your pattern, then it is just a matter of bending the glass tubing into the shape you want. You heat up the section you want to bend in a cross-fire or ribbon burner, with what is called the double-back facing you. The double-back is the part of the sign that you don’t want to be seen, and is blacked out with a special and very expensive paint after the sign is finished. While bending, you’ve got to be careful, because the glass can get over 800 degrees from the heat. After that, it is just a matter of pumping the gas in to finish the sign.

What special techniques do you apply while making a sign?

There are many small things you’ve got to look for, such as tube diameter and the fact that different size tubes require different gas pressures. The main thing, however, is bending the glass. Bending the glass properly can extend the tube’s life by 33 percent. If you don’t pay attention to detail – making the tube’s diameter equal all throughout for example – you will decrease the quality of the finished product. Another thing you’ve got to pay attention to is the gas you put in. When you are finished bending the tube, you weld on transformers to each side, and then weld it all to a manifold. The manifold pumps all the impurities out of the tube using high voltage and a vacuum. You then pump in the gases, mixing different ones such as argon and mercury to produce the color you want. 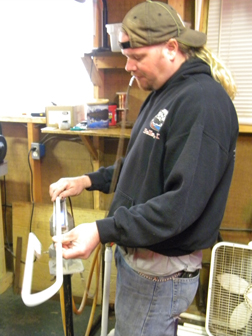 How long can you expect a neon sign to last and look bright?

It depends on how well a tube is made. I only use the best materials, and that’s a big part of how long the tube is going to last. A well-made tube will last twenty to twenty-five years. By comparison, a LED (light emitting diode) will only last seven years. If neon is installed right, you won’t have to touch it. Obviously, you can get hail damage, but we have a protective channel we can install to prevent that. And it isn’t a fire hazard anymore either. With the new ground-fault transformers, if there is a secondary ground fault, the transformers cut off and that section of the light just doesn’t come on until the light is serviced. Like I said though, if done properly, you won’t have to touch it.

What types of signs do you particularly like making? Are some more difficult to make than others?

I enjoy making big signs that get noticed, such as the one I did for Crockett Steakhouse in Denison. When I made Blue Willow’s sign for them, the owner came in and told us that his sign was only up for one day before someone came in and said “I didn’t know you were here but I noticed your sign.” That’s always cool to hear because that’s why I make my signs. As for difficulty, the more detailed and smaller the sign is the harder it is to make. You don’t use as much material in a smaller sign, but it is a lot more tedious. Plus, a small unit takes more time to pump than a larger one. And while it is easy to make say, an “O” than an “A.”, the “A” requires three or four bends, which means it is harder.

2 thoughts on “The Art of Neon”

As pilot Bruce Lemoine brought his Japanese Zero in for a landing, everyone watched anxiously. The war birds have a tendency to tip over on the propeller, fellow pilot Dan Eshelman said as the plane closed on the runway. Lemoine lined up his plane for a landing on the grass next to the runway to soften the blow to the prop in case the WWII bird tipped, but the extra precautions were unnecessary.