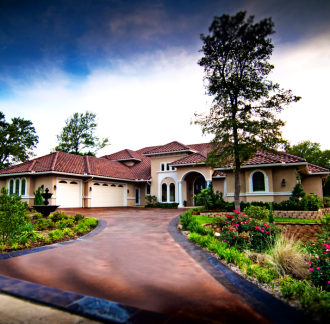 When Patti and Mike Morgan built a home on the lake, they decided to rely on their own experience and creativity rather than on outside help. Mike has been in the construction business for forty-six years and is a real estate developer, so the experience was a given. The Morgans liked the Mediterranean look common in Florida, so they found a selection of house plans reflecting that style, picked one they liked, and adapted it to accommodate their preference for glass and an open, breezy feeling. The couple worked with a computer design program and their builder, Roger Townsend, to modify the blueprints as needed. The house was completed and ready for occupation in only eight months.

Patti worked with Joy Townsend, the builder’s wife, to decorate the home, using objects the Morgans had acquired during their travels. Mike’s hobby is photography, and his pictures became part of the design scheme.

The house is approximately five thousand square feet. There are three bedrooms, four bathrooms, a formal dining area, and a kitchen and family room combination. Upstairs are the game room, music room, and balcony overlooking the pool.

The family room looks out over the 18th green at Eagle Chase, so to bring the tranquility of the outdoors in, the Morgans installed floor-to-ceiling glass doors, connecting the room to the patio, spa and pool, with its “infinity edge” and waterfall. The open design of the house provides for a smooth flow of traffic, and even with a house full of party guests there is plenty of mingle room.

2 thoughts on “The Morgan House”