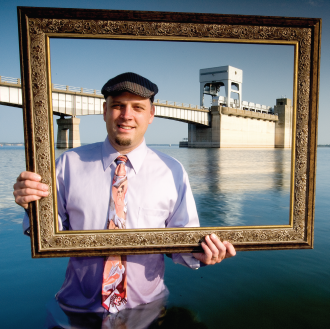 “Perception” is Winegarden’s key word when it comes to art. Visual impressions and how others see things have intrigued him since childhood. “I would see a certain lighting effect on a beautiful day and feel the need to express it, only at the time I didn’t know how to do that,” Winegarden said. His fascination with paint and color led him to sneak into his mother’s nail polish, dab the paint on scraps of trash and stare at the colors in the light. He would put his eye up to glowing lights on appliances or electrical devices and stare spellbound until he began to see an image or a space.

Winegarden said that his series of paintings composed of circular brush strokes has been satisfying, but his latest projects involve photography, and he still questions perception. He experimented with the dangerous-sounding practice of taking photos while riding his motorcycle, to capture motion. When taking pictures with both feet firmly on the ground, he wants to challenge what the observer’s eye sees. Is it a tree or a reflection of a tree?

In 2005, Winegarden studied art history in London, visiting museums and seeing great works of art first hand, not as pictures in a book. But the event that happened on the day he was supposed to come home—the July 7 terrorist attacks on London’s transportation system, which took fifty-two lives—had the greatest impact on him. “I was deeply affected by September 11 here at home, but because I was in London when the bombings happened, they had a personal impact on me.”

Winegarden has a big support base at home in his four children, aged 5, 7, 12 and 13. “My kids have heard me talk about art theories since they were little,” Winegarden said. “They understand the difference in art and something that’s just a picture. They get it. They’re my biggest fans.” Winegarden said that his wife also gets it. “She knew how dedicated I was. I was pursuing art on a deeper level than just painting or selling a picture.”