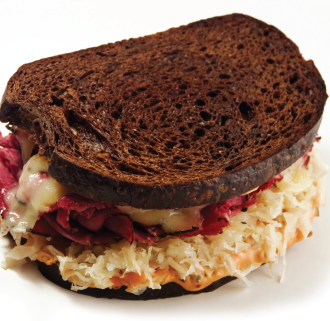 First, a little sandwich history. A rabbi named Hillel (1st century B.C.) started a Passover custom of offering a mixture of nuts, apples, spices, wine and bitter herbs between two matzos to remind the faithful of the suffering of the Jews before their deliverance out of Egypt. As far as we know, his first name was not Reuben.

The Middle Ages (6th to 16th centuries) saw kings, knights, knaves and ordinary folk eating their meals off the first disposable plates. Meat and side offerings were piled onto thick slabs of bread called trenchers. At the end of dinner, you could eat the plate or toss it to the dogs or a varlet. No King Reuben from days of yore shows up in a Google search.

The first true sandwich arrived when John Montague (1718-1792), the Fourth Earl of Sandwich, called for the kitchen at his favorite gambling club to bring him meat tucked between two slices of bread so he would not have to interrupt the game. (He probably was losing. When you are winning you want to interrupt the game and take home the cash.) Montague, whose middle name was not Reuben, tried to draw to an inside straight and was forgotten save for his gift to the sandwich noshing world.

Leap forward to 1914, and a Reuben finally comes into the story. Arnold Reuben may, or may not have invented the grilled sandwich of corned beef, Swiss cheese, sauerkraut and Russian dressing on dark rye that shares his name. Reuben’s daughter says that’s the way it happened, but Arnold Jr. says the time was 1927 or 1928 and that the inventor was not his father, but the chef in his father’s deli. Junior doesn’t recall if the chef’s name was Reuben or not.

There’s another story that says Reuben Kolakofsky, owner of a market in Omaha, Nebraska, came up with the sandwich in the 1920s. Kolakofsky’s secret was to marinate the sauerkraut in Russian dressing for 24 hours before assembling the sandwich. That, at least, is how Charles Schimmel, the innkeeper of the Blackstone Hotel in Omaha, Nebraska did it. However, the “creator” of the reuben, Schimmel’s friend Reuben Kolakofsky, first used ummarinated sauerkraut because the men had run out of lettuce for sandwiches during their weekly poker playing session. Kolakofsky substituted the kraut, and grilled the sandwich, it is said, to somewhat hide the pickled cabbage flavor, and to melt the cheese.

Schimmel (or his son) eventually put Kolakofsky’s sandwich on the menu at Schimmel’s hotel, and in 1956 62 TeFern Snider, a waitress there, entered the sandwich in the National Sandwich Idea Contest. The Reuben won first place, and achieved national popularity.

We reuben lovers are just lucky our passion didn’t end up being called an Arnold or a Kolakofsky or even a Snider.

However the sandwich came about, a correctly made reuben is truly a wonderment, particularly with a little mustard on the side to add to each bite and a cold beer. Lately, however, as more eating establishments have gone to heat-um-up menus, a good reuben is hard to find. Too many places toast the bread instead of grilling it or, even worse, toast it and then microwave the sandwich. This results in a soggy bottom, and nobody likes a soggy bottom.

There are a couple of acceptable variations. Substitute pastrami for the corned beef and coleslaw for the sauerkraut and you have a Rachel. And a place in Atlanta used to make reuben pizzas, with Thousand Island dressing instead of tomato sauce and corned beef, Swiss cheese and sauerkraut for the topping.

But the real thing is still the best. There is even a song you can sing while waiting for the waiter to deliver your lunch. You learned it in grade school—“Reuben, Reuben, I’ve Been Waiting.”

There is nothing special about the old metal building standing in quiet obscurity somewhere in Sherman. The building is the home of C&S Racing, but there is no sign outside, nothing to indicate that behind the plain walls and nondescript paint are some of the most famous and respected racing and sports cars ever to take a checkered flag.