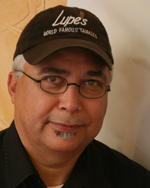 Think Wall Street. Very good. What comes to mind? Bears, bulls, stock exchange, high finance, tamales—Whoa! One moment please. What have tamales got to do with Wall Street? Well, it’s all about location. If you are thinking about the Wall Street in the Big Apple, all of those money references are a natural, but if it’s Wall Street in Sherman, then tamales take center stage—Lupe’s World Famous Tamales to be precise.

John Arriazola has turned a generations old family tradition and recipe into some the hottest Mexican cuisine in Texoma. In bringing Lupe’s World Famous Tamales to Sherman, Arriazola has introduced local folks to a treat that is not all that common in the land of its birth—Mexico. “Mexicans don’t eat tamales except on special occasions,” said Arriazola. “Mexican tamales are usually made only during the holidays, because they are just too hard to make. I wanted them to be something that was available all year long. 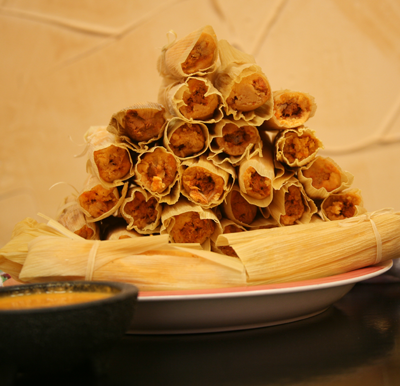 The tamale has been around for over 2,000 years. Pre-Columbian drawings found in Guatemala show women offering tamales to the gods, and tamales are found all over Central America. “In Puerto Rico and some other countries, they wrap the tamales in banana leaves rather than corn husks,” Arriazola said. “I like to say that McDonalds’ has nothing on us; there’s no telling how many tamales have been sold over all of those years.”

Lupe’s has been adding to the tamale totals for a few years, but Arriazola has been around tamales and authentic Mexican food all his life. “My family had a Mexican restaurant in Houston in the 1950s called La Polka,” he said. Yes, that’s polka as in um-pa-pa, um-pa-pa. It seems that Mexico has a great affinity for polka music. “All the recipes we use here at Lupe’s come from my parents and my grandparents. That’s where I learned to make tamales.”

Arriazola spent the early part of his working life with Big Blue – IBM, – but in 1983 he left the company and joined some other former IBM employees in an enterprise venture. Then he moved to Orlando for a job. About a year later, he packed up again and headed for Sherman to run an office equipment center and then a computer store. That was 25 years ago.

The computer store, the Mouse Pad—blew a fuse following the events of September 11, 2001. “I didn’t do much of anything for about three months. Then I thought maybe it’s time to open a restaurant.”

It was something he had done before, albeit on a smaller scale. “A few years before, I got about 15 women together and we made over $5,000 for a fund raiser making and selling tamales, so I borrowed a commercial kitchen in Denison from a friend of mine and started making tamales myself, by hand, using my parents’ recipe.”

Within a few months the tamale business was booming, and Arriazola was looking for a bigger place, with a rent he could handle. He found it on Wall Street in downtown Sherman. “Nobody came down here. Not even many cars. The street is only two blocks long,” he said.

At first the business was strictly carry-out. “Then I noticed people would buy a dozen tamales, and eat them in their car, so I got the building next door and put in some tables.” As more and more tamale hounds learned about Lupe’s, the one dining room was not enough, so the business expanded to another dining room.

Lupe’s is not Tex-Mex. “What I wanted to do was emphasize tamales,” said Arriazola. “No Mexican restaurant really does that. A lot of restaurants buy their tamales premade from a food wholesaler.

Lupe’s is a relatively small operation, although just moments before Arriazola sat down to talk, a customer walked out with 107 dozen—that’s 1,284 tamales. Each one made by hand. “We do everything here,” said Arriazola, “we mix our own masa and prepare and season our own meat.” The traditional pork filling came from hog’s heads, and Arriazola says those are still the best, but nowadays he uses lean pork butt—boiled with spices and then shredded. Chicken and black beans make the other traditional fillings at Lupe’s.

But Arriazola says the absolute best tamales are filled with brisket. “They are unbelievable; you can smell them a mile away. We can’t keep them in stock; as soon as we make them, they’re gone.”

Whether it’s beef, chicken, pork, venison, beans, the key ingredient to the filling is the molé poblano sauce. Think Mexican barbecue sauce. “We use three different kinds of chili peppers in our molé. We cook them, puree them, and mix with the meat. The masa is basically corn meal, broth and seasonings, and that’s made into a dough,” he said.

Yes, there is a tamale machine in the kitchen, but it is not very high tech. It’s an extruder, with two cylinders, one inside the other. The masa goes in the outer ring and the filling in the inner circle, and when the tamale lady pulls down on the handle, a tamale slides out. Each tamale is wrapped in a corn shuck that has been soaked in water and tied with a strip of shuck.

Christmas is when things are really cooking in the kitchen. Cold weather and the traditional celebratory nature of tamales in the Hispanic community mean that Lupe’s will be shredding and mixing, wrapping and steaming even more tamales than at other times of the year. “We will get thousands of orders,” Arriazola said.

Several restaurant chains have inquired about adding Lupe’s to their menus. One outfit offered to buy 17,000 a week, and the idea of franchising the operation has arisen, but John Arriazola says no way. “I want to keep my tamales hand made.”

This article appeared in the Spring 2007 issue of Texoma Living!