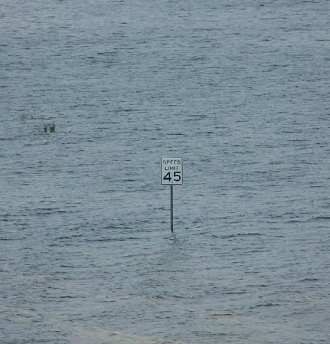 by Joe Munoz and Betty Crites

From a satellite’s point of view, Lake Texoma resembles a rough-around-the-edges dragon. Last summer the dragon escaped the shoreline that held it captive for 64 years. But raging whitewater didn’t pour over Denison Dam, it was a creeping, relentless flow.

Beginning in May the skies opened, the rains fell and the lake level slowly rose. “It began to rain around Memorial Day. That was the first holiday we lost,” said Jason Cottingame, General Manager of Grandpappy’s Marina.

For people whose livelihoods depended on the lake, people who had been through a business-straining drought the year before, the daily dousing was a stomach churning irony. “You wake up in the morning, it would be raining again, and it would just make you sick,” Cottingame said.

Lake Texoma’s normal depth is 617 feet above sea level. It eventually rose to 640 feet and nine inches. The Denison Dam’s spillway is at 640. “The water was almost 24 feet above normal,” said Army Corps of Engineers Lead Ranger Chris Lynch.

Texoma usually stretches out over 89,000 acres. “At the worst it was covering 110,000 acres,” said Lynch. Dozens of businesses around its 1,250 miles of shoreline were nailed by the lake that usually feeds them: marinas, resorts, parks, even fishing guides. Though the Army Corps of Engineers had alerted everyone around the lake when the water level hit 630 feet, it was still unsettling. “It rose half a foot, sometimes a foot a day. It was an eerie feeling,” said Tim Hayes, General Manager of Highport Marina. “The boats were floating 30 feet above where they normally were without any damage because the boat houses are on pilings, pipes that move up and down as the water level changes.”

Pompano’s Restaurant, The Clipper Bar and Sherman Power Sports were not as mobile. “Our entire lower level was underwater,” said Hayes. He pointed at what resembled a dirty bathtub ring, an indicator of where the water stopped short of the second floor of Highport’s offices. The marina’s financial loss was staggering. “Nine million in structural and road damage, a couple million in lost business,” the frustrated general manager said.

Jason Cottingame at Grandpappy’s empathizes. “Our retail sales, boat sales, service, parts, were all down 40 percent. Grandpappy’s had around three quarters of a million dollars in damages. Two shops went under water; our restaurant took the brunt of it.”

The rising water impacted the entire region. Depending on who is counting, losses amounted to anywhere from $400 million to $500 million.

During the flood, a handful of hard-core boaters still wanted to check on their vessels. “We ran water taxis around 21 hours a day. I had someone who would pick people up and take them to their boats to check on them,” said Cottingame.

Hayes did the same thing at Highport. “It was a tremendous team effort. It was wonderful; the clients supported us 100 percent,” he said.

Even some of the smaller businesses on the lake refused to let the flood stop them. “When it hit, we could have told customers, ‘we can’t do it, the water’s too high, we’re sorry.’ Instead we rented a pontoon boat to get to their boats,” said Joshua Hulsey, owner of Yacht Docs, a boat detailing service.

Customers weren’t the only concern. Employees were a concern as well. Even though their influx of cash had been cut off, Grandpappy’s, Highport, Yacht Docs, even a hard hit local restaurant did not issue pink slips.

“I had employees relying on me for their livelihood, I was accruing additional bills, and I had my doubts about whether it was feasible to continue operations,” said Hulsey.

“It was out of my control. I just had to hand it up to a higher power.”

That loyalty didn’t go unnoticed. “Even though the customers couldn’t get out here, Jason told us we still had a job, to keep coming out,” said bookkeeper Lilta Sullivan. “We pitched in and did what we could. I’ve been here 19 years. This is a family.”

A few minutes up the road at Da Happy Cajun it was the same. No boaters, no fishing guides, no weekend visitors meant hard times. “We had four months in the red, but we still kept our employees. You don’t let good people go,” said restaurant owner Terry Wall.

The Walls refused to let the flood get the best of them. “We’re family owned and operated, so you cut corners. We’ve been in business for 40 years. You know how to tighten your belt up, and you do what you gotta’ do,” said Wall.

But not every business lost money; at least one had more folks walking in the door than normal. The Dairy Mart, a burger joint, fed folks coming to check on their boats, folks who came to gawk, and folks who came to rebuild.

“It made us sad for everyone else. So many other businesses were struggling,” said Theda Anderson, who described herself as Dairy Mart’s co-owner and janitor. “At least we got to hire someone who’d been laid off because of the flood.”

Back at Highport, watching heavy machinery roll over the spot where his restaurant once stood, Tim Hayes crossed his arms, took a deep breath, held it a moment, and then let it out, presumably releasing stress with the exhalation. “We’re rebuilding, making lemonade out of lemons. Our product will be better in the end, but it will take a couple of seasons to get there.”

Chatter around the lake that insurance payments were coming slowly, that companies were dragging their feet on paying, or that the flood was man-made because the dam wasn’t opened, elicited little response from anyone. Requests for insurance company names were politely denied.

Army Corps of Engineers Lead Ranger Chris Lynch said the dam couldn’t have been opened. It worked as designed. “We feel bad about how our partners were affected, but the number one purpose of the lake is flood control,” said Lynch. “It trumps everything, the water supply, hydro-power, recreation purposes.”

Had the dam not remained closed, Lynch said hundreds of thousands of people down river would have been inundated. “It’s crazy if you look at the drainage area of Lake Texoma. It takes runoff from a third of Oklahoma and all the panhandle of Texas.”

So swollen was the lake, that once the rain stopped, it took 110 days, more than three months, of open floodgates to get things back to normal. “We’ve gone years without opening them once,” the ranger said.

Most businesses around the lake are open again, doing what they can to rebound. “Our customers are coming back in droves,” Cottingame said. “They’re excited about having their boats, and they’re excited about getting back out on the lake. They haven’t been able to for 18 months.”

Amidst that excitement, Lilta Sullivan summed up most people’s feelings pretty well with a quiet prayer she’s been sending up.

“Please let us have a good season. We need it.”

In the time before the freeways, automobile travelers entered Sherman and Denison on city streets lined with tall trees and stately houses. Our city centers were marked by civic buildings, town squares, and church spires rising up out of park-like groves. This rich architectural heritage, coupled with our location among the rolling hills of the Cross Timbers, created a unique identity for the two towns.

There are neighborhoods in Texoma’s towns where, if no modern automobiles intrude, a visitor could believe he was back in the the 1920s or 30s. In contrast, the growls of earthmovers drown out the birds around the new developments near US 75 and US 82. This dichotomy of old and new may be Texoma’s signature.