“I’ve been drawing since I was a very little child, so it’s kind of been a part of my expression of who I am. I was really interested in watercolor specifically, and I’m not sure why, but I was just intrigued by it.” 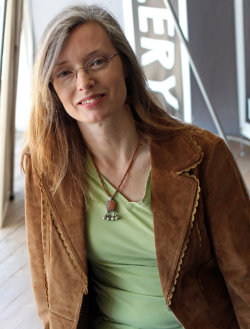 Krystall Barnes launched her career as a watercolorist while an art student at Montana State University in Billings. In the past, watercolorists used pastel colors and their works were more or less impressionist in nature, but Barnes labors in a very different way to produce works that abound in vivid colors.

“The technique that I use is very similar to printmaking in that I only use the three primary colors. I decide ahead of time what kind of colors I’m trying to get, and then I layer colors instead of mixing them ahead of time on a palette and apply them to the paper. You could call it mixing by layering.”

For Barnes, her paintings of fruit and flowers are more than florals or landscapes. They reflect a love of nature that was nurtured during her growing up in the Pacific Northwest. “Nature can be really fragile in some ways, but it’s also powerful in other ways. I like to think about that and play with that idea when I’m painting, the power of nature versus the fragility of it.”

The power of natural things in Barnes’ vision is not menacing, however. “The environments I’m trying to create are safe, welcoming environments. I think that living in the Pacific Northwest I was exposed to lots of different kinds of environments. I really developed a respect and deep appreciation for the natural world in general. I think a lot about what we do to our environment, how we harm it and how the natural world has been able to keep on surviving even though it’s been exposed to so much. Those are some of the things I think about when I paint.”

Before coming to Texoma, Barnes lived in central Pennsylvania where her husband, Dave, taught at Penn State Worthington Scranton. “I did a couple of years where I was just doing leaves because the foliage out there is so gorgeous in the fall. I’d pick up a leaf and go ‘wow’, and I would have to go in and paint it, and I would paint it in detail. To me the details are really important. For some reason, when I get an idea for a painting it’s always a snapshot, and it’s usually something of a close up. I like to look at things closer up and in detail.”

The couple moved to Durant three years ago when Dave took a position in the Visual Arts Department at SOSU, and Barnes transferred her affinity for the natural side of art from the eastern woodlands to the Oklahoma prairie. 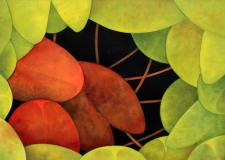 And then there were the eggs. “For a long time I was drawing and painting eggs because eggs are so fragile, but they hold life, you know. Things like that really fascinate me, things that are delicate, but strong.”

Barnes work can be seen at the Artplace Gallery, 413 W. Main Street in Denison, or at www.krystallbarnes.com.

“Before, I never could remember the end of a joke,” said Mary Smith. “But now I can tell a joke and remember the whole thing.” Because Smith occasionally presents programs to large groups as part of her job with the Texoma Council of Governments, her supervisor urged her to join the Toastmasters to improve her public speaking skills.

Radio in Your Pocket