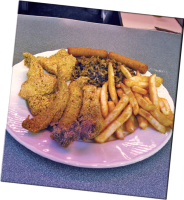 Editor’s Note: This article was written in 2006. You might want to check before you head out to one of these places.

This article first appeared in the Winter 2006 issue of Texoma Living!

We took a vote here at the Texoma Living! editorial office and the majority agreed that in Texoma, eating is a major social event. It’s not just the fact that at the time we were eating cold, two-day-old Hawaiian-style pizza at 3:00 a.m. while working on this section of the magazine. No, we all pretty much agreed that Big Food is a big part of our lives and that there’s some mighty big food right here in Texoma.

The next thing we talked about is how not to make a bunch of people mad because space won’t allow us to mention every really good place to eat. So, we’ll start with the basics: catfish and hamburgers.

Here in Texas, if we don’t get a whole lot on our restaurant plate more than we can actually eat, we somehow feel cheated. Leaving a few scraps behind assures us that we’ve gotten our dollar’s worth. People who aren’t from around here (non-Texans) are often stunned by the largess of food delivered by the waitstaff. We simply tell them, “Everything is bigger in Texas.”

There isn’t any secret formula for good catfish; it’s about as basic as it gets—fresh fish, cornmeal, oil for frying. Each cook adds a touch of this or a dash of that to the breading, some marinate the filets and some add a preparation twist or two, but the only way to decide your favorite is to try them all. The restaurants all buy from a regular list of growers, more often than not from the Mississippi Delta, whose products maintain a consistent flavor profile. That’s a fancy term for taste, and the delicate taste of channel cat can vary according to a number of controllable factors such as food and the condition of the ponds. Top growers monitor their products regularly to assure the quality stays the same. For all their ferocious appearance, catfish are sensitive critters, and the best growers take care to insure that the fish are not stressed when they are delivered, live, to the processing plants. It’s a fast business, and the fish on your plate probably was swimming around a few days before. All of the restaurants keep their fish cold and iced down, until just before the go into the vat as the cold preserves the quality, texture and taste of the final product. 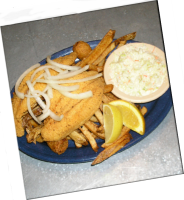 One of the most popular catfish houses in the area, John Pierce started Huck’s 15 years ago in Pottsboro. Then as now, he uses Mississippi farm raised channel catfish, always fresh and never frozen, The filets are breaded rather than battered, a technique common to all the Southern style fried catfish we tried, and then fried until the meat is white and flaky. Undercooked fish will be opaque instead of white. The filets weigh around four ounces each, a bit bigger than in most restaurants, so a full order of four pieces is a man-sized meal. The tarter sauce and cocktail sauce are made in Huck’s kitchen as are the hush puppies and coleslaw, and you can’t have catfish without hush puppies and coleslaw. It’s the law.

Terry Wall is de happy Cajun in question and the Louisiana native has built a solid base of happy customers with a full service restaurant highlighting the cuisine of the bayou. Catfish is his biggest selling item and he thinks he knows the reason why. “We cut our filets into strips and marinate it before we cook it,” he said. And no, he’s not telling what’s in the brew. The strips of fish are breaded and cooked when ordered, in canola oil. There are two styles of fish offered, Cajun and Southern style. The Cajun version is a bit spicier, but not hot, as in spicy hot, as some folks think. The filets are cut first into different shapes so the cooks and the customers can tell which is which, and Wall says he likes to let people have a taste of both styles to see which one they prefer. A sweet Cajun coleslaw sets off the crisp fish, and if you don’t try the yam casserole, you’re missing a real treat. 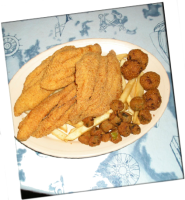 “Katfish,” with a “K”? Well, as the senior members of the catfish cooks around here, Chuck and Arlene Hicks can call it what ever they like. They started 27 years ago in little shack near the lake that Chuck bought with a $500 loan on an old pick up truck. If there is a secret to bring the customers back, Chuck Hicks says it’s cooking the fish when it’s ordered and serving it hot—the hotter the better. If fried fish sits more than a few minutes, the residual steam in the meat will make the crust soggy. Hicks has two portable kitchens that he uses for catering, but even when feeding 50 or more he doesn’t cook up a batch of fish until it’s needed. “I give them a 10 minute start and just keep on cooking,” he said. 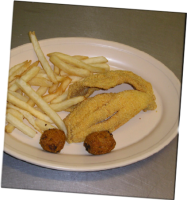 Folks from Texas have been driving across the Denison Dam for 20 years to sit down to an all-you-can eat platter of Windy’s catfish filets or, in a bow to tradition, a whole fried catfish. Sherry Bridges, who was having a stack of hotcakes when we dropped in, has owned the popular restaurant since it opened. Hey, it was about 10:30 in the morning, so pancakes were appropriate. But even at that hour, there were customers waiting for the catfish to come out of the kitchen. If Sherry has a secret, she’s not telling. She claims her food’s not all that special.The customers are not buying that, as evidenced by the fact that they’ve come to  Cartwright all these years, and well, Windy’s is the main attraction in Cartwright, so they are not coming for entertainment. 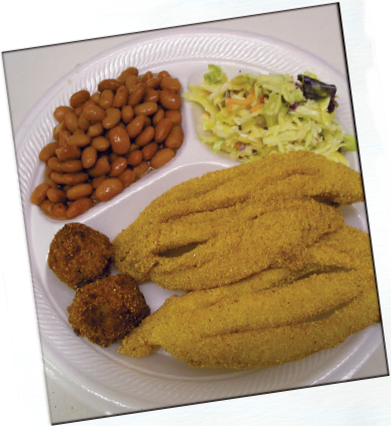 Jackie Turbeville opened his catfish cafe four years ago, but already he is drawing attention from catfish lovers from all over. The food finders from Texas Highways, found the Bells restaurant, and gave it a write up. Turbeville was a fishing guide from Mississippi before moving to Bells, and the walls of the restaurant are covered with plaques and trophies attesting to his skills. In addition to the specially seasoned cornmeal breading, he employs several cooking techniques not seen before. Retha Purdue, working in the kitchen on a Saturday afternoon explained. “Our crust is firm, but not too hard or too soft, and we don’t cook all the meat away.” Cooked too long, the meat inside the breading will shrink leaving only a thin sliver surrounded by crust. Jackie’s uses slightly thicker filets, and then cuts three slits, with the grain, on the skin side of fish. (There is no skin on the filet of course, but there is a skin side.) This allows the fish to open up during cooking, exposing the center to the heat and insuring a filet that is cooked all the way through, but still plump. It’s also important to lay the fish in the cooking oil with the skin side up; this keeps the filet from curling. Retha dumped a double handful of chopped cabbage in a bowl, added a dollop of Jackie’s special dressing and massaged the mix with a plastic gloved hand before putting it on the plate. It was crunch time for both fish and slaw.