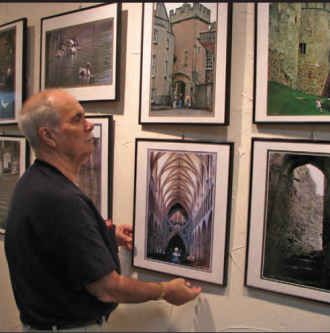 John Frair, a former United Press photographer, spent a career recording the great and near great, the tragic and inspirational events of the past on film. In June, Frair will display an exhibition of his travel photography at the Creative Art Center in Bonham. The photographs chronicle trips to London and the West County of England, Belgium, Spain, France and Paris.

There are about 120 pictures in the exhibit, and on an afternoon, a week or so before the opening, Frair was busy hanging and arranging his works. “I’ve been going to Europe for the past 20 years, and these pictures represent some of my favorite places,” said Frair. “I went back and forth every year or so, so things I missed on one trip, I got on another.”

In his news service days, Frair photographed President Lyndon Johnson, was the only professional photographer on the scene during the Tower shootings at the University of Texas and recorded the Civil Rights revolution at Selma and Montgomery. “I covered the space programs, from the beginnings with Mercury through the first couple of Apollo mission,” Frair said. That ought to be enough, but you can add 30 years teaching photography at the college level and 10 years as the publisher of the Bonham Daily Favorite and as well as newspapers in Honey Grove and Ladonia.

On tap for the Autumn issue of Texoma Living! is a retrospective of some of Frair’s most important work.

The wars on opposite sides of the world fought by Charles Baum of Whitesboro and Leonard Riley of Denison were very different, but both were extraordinary examples of courage, steadfastness, and faith. Theirs are two of those sixteen million stories, and they bear remembering.