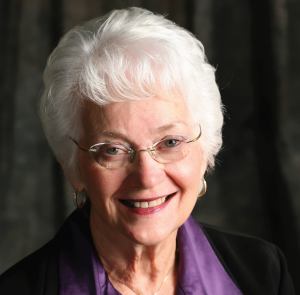 This Texoma Profile appeared in the Winter 2007 issue of Texoma Living!.

“There are just no perfect deaths.”

Joan Douglass once believed that wall-to-wall carpeting and a white telephone were evidence of a successful life.

That was when she and her husband Bill were first married and had few assets other than their love for each other. Joan quickly discovered that service to others brought greater joy than any purchase and that her greatest security came not from things, but from a strong faith.

Active in many charitable organizations and well-known throughout the area for her leadership, Joan is passionate about her work with Home Hospice of Grayson County, which was chartered in 1982, a year after she and Bill moved to Sherman. Joan was looking for new friends and a cause she believed in. She was invited to help develop a fledgling agency whose mission was to care for those who were dying.

“Everything was a struggle at first,” Joan remembers, smiling. “We had to figure it out together—where we’d meet, how we’d get enough money to operate and where we’d find a nurse familiar with the hospice mission.” Although the first hospice organization was established in1974, the concept of “adding more life to every day” during times of terminal illness was not one most families, or even some members of the medical community, found entirely comfortable. Today, a comprehensive team, headed by the patient’s physician, provides end-of-life services administered by caring nurses, aides, social workers, chaplains and volunteers.

Pain management is a big part of hospice care, which neither prolongs life nor hastens death. Treatments are provided with the utmost dignity and respect, with attention given to all members of a patient’s family.

Joan first learned about the approach while she and Bill lived in Connecticut, where the first hospice in the United States was organized. The concept made sense and she was eager to bring the services to Grayson County.

Sherry Little, Executive Director of Home Hospice, says, “Joan found that working with our organization provided a way to make a significant difference in the lives of others. She is a dreamer, believer, leader and friend.

Those who know Joan appreciate that no challenge is insurmountable to the petite woman with sparkling blue eyes and a fierce determination to get things done. She rolls up her sleeves and does everything from serving on the board and on numerous committees to training new volunteers about bereavement and the grief process.

While some people avoid anything having to do with death as best they can and for as long as they can, Joan says she finds nothing depressing about meeting the multitude of needs for hospice patients and those who love them. “There just are no perfect deaths,” Joan says. “People are forced to deal with death under all kinds of circumstances and it can be overwhelming. Sometimes it’s a blessing and other times, a terrible shock. Having support from a knowledgeable, caring team helps not only at the time of death, but before and after.”

Joan describes the grieving process as a roller coaster of emotions, many of which take a long time to heal. “People often feel guilt and anger, as well as sorrow. Part of healing is acknowledging the full range of feelings. We help people acknowledge and celebrate even the imperfections of their loved ones, and also to forgive themselves—and the one who has died.”

Having a strong faith brings people through the grief process faster, Joan believes, because they are comforted by the assurance of a new beginning. While Home Hospice does not advocate any one faith, they have a staff chaplain and consider the spiritual needs of patients and their families. “Every person connected with hospice is sharing their faith in some way by caring for others,” Joan says. “It’s just part of the organization’s culture.”

When asked about confronting her own mortality after doctors found a brain tumor, which turned out to be benign and was removed in 1993, Joan gracefully contains her tears. “I never thought I would die, but I was afraid I might be seriously handicapped. Had circumstances turned out differently, I would have turned to Home Hospice because I trust them completely to care for me and my family.” She looks down, pausing for a moment, and says, “I am so very blessed.”

Her belief in Hospice has never faltered through the years of enormous organizational growth and the changes brought by new staff and volunteers. Joan says every single one contributed a skill or perspective or experience that enhanced the organization. She is proud of what Home Hospice has achieved and is honored to be named the honorary chair of the 25th Anniversary Celebration, which will be held on December 8 in the Sherman Municipal Ballroom.

“Over the years we have established many strong partnerships, and the gala will be one way of acknowledging and appreciating those relationships,” Joan says. “We work closely with Grayson Home Health, who is our premier gala sponsor, and other agencies that broaden our capacity to deliver meaningful services to more and more people.”

Asked if some might find the frivolity of hosting an event featuring the dueling piano players from San Antonio’s Howl at the Moon incongruent with the seriousness of Home Hospice business, Joan laughs. “Hospice is about celebrating life. The event will truly be a celebration.”

Proceeds from the evening will help support Home Hospice’s work in Grayson County. “Our census just keeps going up and up,” Joan says. “We get many word-of-mouth referrals where grateful families recommend us to their friends facing medical crises. The challenge of growth is to preserve the meticulous care and thoughtful services of a smaller organization. Our kind and loving culture supports that transition and I’m confident we’ll continue to provide outstanding services no matter how much Home Hospice grows to fill community needs.”

Joan downplays her role in the organization’s huge success. “I’m just one piece of the puzzle which is held together by many caring people bringing enormous value to get the job done,” she says. While that is undoubtedly true, Joan’s grit, steadfastness, energy and enthusiasm have earned her a secure place in Home Hospice’s legacy of 25 years of service. It’s the kind of success Joan values most.

Just 17 miles southeast of Sherman on US 69 and SH 11 in extreme east Grayson County, Whitewright is a prototypical Texas town with one foot in the past and the other firmly planted in the here-and-now. Settlers from Kentucky established the area in the late 1800s. Whitewright was a land rich for cultivation and cattle, a wilderness of grasses, flowers and forest.

There’s a great story behind the grand prize in a fundraiser to benefit the Child & Family Guidance Center of Texoma. Gerald Knox bought a rare 2003 Harley-Davidson Screamin’ Eagle Road King motorcycle. He kept it preserved as a collectible with just 18 miles on the odometer. When Knox decided this summer to relocate out of the area he donated the bike to the Guidance Center to raffle for charity.