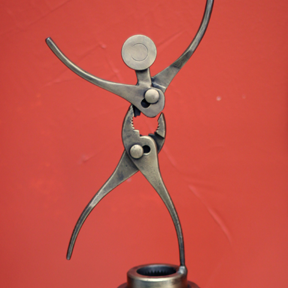 “I like to make things that people can touch,” said Jerry Tate. “I get in trouble at museums and have to keep my hands in my pockets.” Tate is a sculptor, and not your regular Michelangelo, either. He creates things unusual out of things most common. When finished, his craftsmanship and ingenuity produce conversation as well as art.

Tate passed on a considerable artistic touch to his daughter, Shelley Tate Garner, an artist who operates Artplace Gallery in Denison. “She started Artplace and had been after me for years to do some sculptures,” Tate said. “I hadn’t been too enthusiastic about it, but I thought I’d give it a try.” Obviously, daughter saw something in dad that he had yet to discover about himself.

What do you think of Jerry’s art? Share your opinion with our other readers.

Wrenches, saw blades, pliers, nuts, and bolts are important entries on Tate’s supply list. That’s not so surprising,as he spends days managing the parts department for Stuteville Ford in Tahlequah, Oklahoma, but it’s the junk pile that proves much of the grist for his artistic imagination. “Almost all of [my materials] have been found objects. I like the thought of taking something that has outlived its usefulness in what it normally did and turning it into something totally different,” he said. “Instead of having it go into the landfill or junk pile, I pick it up and save it and try to use it in some way.”

The “some way” is sometimes the hard part. “Well designed tools are artistic in themselves, and I can see them being something else. But a lot of times, I’ve got something in mind that I want to do. If that’s the case, I’ll just start digging through all the junk. Sometimes I’ll end up picking up something I’ve looked at ten times before.”

His favorite subjects are dancers, birds and natural things.. “I’ve never done anything, so far, that’s non-representational,” he said.

We liked Jerry’s story so much we printed it twice. Not so. A mistake in the print edition of Texoma Living! is regrettable. Oops!

Don’t think for a minute that “parts is parts.” Experience has helped Tate know what objects are likely to work best to produce certain shapes. Turn a pair of pliers over slowly in your hands and perhaps, like Jerry Tate, you will see the graceful ballerina. Or take his cranes. “I usually have an idea ahead of time with large pieces, like the cranes. I may see an automobile part and think, you know, that would make a great crane body.”

Tate’s job at the auto dealer provides a great place for finding sculpture supplies. He sold his most difficult piece, a tree made of car parts and titled “Koboku,” to a car enthusiast in Sweden. The visiting engineer recognized the car parts and had it shipped across the Atlantic.

Most of Tate’s sculptures take from twenty to twenty five hours to complete. The most difficult decision with all his art is deciding when to stop working. “That’s one of the hardest things—to know when I’m done. Usually when I decide I’m done, I leave the piece alone because invariably if I go back and work, it’s not as good as it was.”

Tate also works with wood. “I’ve never bought a piece of wood I’ve used for sculpture,” he said.He usually starts carving with no preconceptions, chipping or grinding or carving away the wood until he finds the object inside. Unlike his metal sculptures, one of Tate’s wooden pieces may forever be a “work in progress.” “I like people to touch it, hold it. If it gets scratched, I can work on it again.”

With its sharp-edged tools, torches, grinders and welding equipment, Tate’s work environment is not for the careless. Safety is priority one. “Goggles and ear protection,” he said. “I recommend goggles and ear protection to anyone who is young. I like to wear tight-fitting gloves if I’m woodworking. When I get tired, I need to quit, because that’s when I’ll get hurt.” Tate has blacksmith tools, farrier’s tools, a cutting torch, welders, and a spray gun for applying the graphite finishes he favors.

Currently , Tate is working on two stainless steel wall pieces and another tree. And after that? Well, that depends on the next junk pile he finds.

Jerry Tate’s sculptures are on view at The Artplace Gallery in Denison. He has exhibited at Durant’s Magnolia Fest, the Great Plains Show held at Southeastern University with the Red River Arts Council, and at the Centre Gallery at Grayson County College. He can be contacted through Shelley Tate Garner at Artplace Gallery.

Man Behind the Mask

The charcoal and silver reptilian patterned face mask—the Black Mamba—hides Jerry Wright’s salt and pepper goatee and ready grin. In gray sweats, sunglasses, and a black company ball cap turned backwards, the man behind the mask is the Black Mamba’s creator and CEO of Save Phace Inc, a company which produces protective face masks for all manner of sports and athletic endeavors.

On Thursday, February 7, a fire at the Imperial Sugar Company near Savannah, GA sent dozens of workers to the hospital, eight lost their lives. The Port Wentworth, GA plant is one of the largest in the U.S. and refines sugar products marketed under the brands Imperial, Dixie Crystals and Holly.