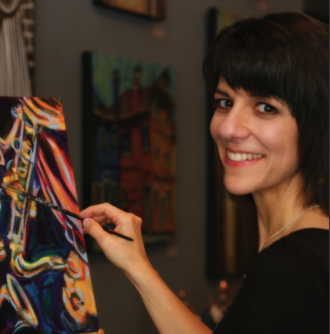 The creativity in Janet Karam’s paintings is undeniable. Her contemporary, colorful takes on saxophones, jazz musicians, buildings, blues singers and ballerinas vibrate with life. “I think I had a spark from a young age,” Karam said about her creative streak. “It was lying dormant, but my mother helped light it, and now in my older years she nurtures it.” Karam’s mother is Denison photographer and gallery owner Mary Karam.

Janet Karam graduated from the Art Institute of Dallas in 1988 and lived in Texas and in Colorado. She did not paint much while in Colorado. The outdoors and her job as a massage therapist consumed her time and energy. Her creative outlet was massage therapy. When she moved to Denison three years ago, Karam began painting every day. She said that the birth of her son—he is three—has helped her focus on her art. Dr. Donna Finch Adams, one of the artists featured in last year’s Texoma Living! Arts issue, has played a major role in Karam’s development, guiding her as an artist.

Inspired by the historical buildings that line Denison’s Main Street, Karam’s “Funkytown” series has been one of her favorites. She said that she likes to watch the reaction people have to a Funkytown painting. “People become expressive when they see these paintings because they’re fun, playful and animated,” Karam said.

Funkytown led to her unique interpretations of architecture around the world. She calls those paintings celebrations of old architecture. “I’m drawn to the old architecture because those buildings have so much more character than modern buildings,” she said. “There’s something about giving life to the old and abandoned buildings.” Karam’s buildings do come to life on her canvas, appearing as if they are bouncing to an unheard rhythm.

As the architectural paintings were Karam’s favorites when she was working on them, her favorites now are the jazz musicians. Old black and white photographs provide the inspiration for playful saxophones and expressive singers. Karam jazzes them up with her own style of color and the abstract.

She had to get over misgivings about using photographs as her muse. “I used to think art was strictly from your head,” Karam said, “but as a dancer needs a choreographer, sometimes I need a visual reference, a starting point.”

Under the assault of national chains, big box retailers, and Internet discounters, local bookshops in many parts of the country are closing their doors and saying goodbye to devoted customers. In Denison and Sherman, three local bookstores, Epiphanies, Ex Libris, and The Book Rack have bucked the trend and kept their doors open, and Texoma bibliophiles are glad for it.

Depending on your own personal experience, the words summer camp bring back a flood of youthful memories. For most what is remembered is swimming in cool lakes, sitting around warm campfires, walking nature trails and making lifelong friends.