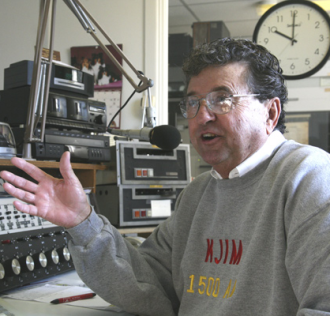 Bob Allen has been in the radio business since he was a kid in Oklahoma City. He owns and operates Texoma’s KJIM-AM 1500. With a notable career in radio and advertising from one coast to the other, Allen always wanted his own radio station. He got it when he moved to Sherman in 1994, bought KJIM, a religious music station, and gave it a new life with a lineup of nostalgia music and old radio shows.

Well and good, but even Allen’s impressive credentials and long experience in broadcasting pale to his real claim to fame. Bob Allen knew Icky Twerp.

“I worked at KFJZ-AM in Fort Worth. KTVT-TV, Channel 11 was in the same building,” said Allen. “Icky Twerp worked for KTVT and I saw him every day.”

Icky Twerp was Bill Camfield, who graduated from TCU in 1955 and went to work for a Fort Worth department store. When a friend suggested he might get some work in television, Camfield gave it a whirl. The television whirl lasted more than 30 years.

He started by creating commercials for advertisers. It took a special sort of wackiness to come up with a character called Mortimer Moneybags to promote a local bank, and the station executives knew talent when they saw it, so they turned Camfield loose to come up with other characters to host their local shows.

In those days, stations carried a lot of original programming, and this was especially true at KTVT. There were four stations in Dallas and Fort Worth, and KTVT was the only one without a network affiliation. With a line up of old movies and kid shows, they were scrambling to fill the broadcast day, and Camfield, with his amazing imagination, quickly became the man to call when the station needed something to put on the air.

He began as Captain Swabbie, the host of a cartoon show. Then came Ickabod Twerpwhistle and later, Icky Twerp.

If you were a kid living within range of Channel 11 in the late 1950s and early 1960s, you watched “Slam Bang Theater” with Icky Twerp every day.

It was Icky, the apes, cartoons and the Three Stooges. Icky Twerp became so associated with the Stooges that they put him in their 1965 movie, The Outlaws Is Coming.

“The camera guys were the guys who wore the gorilla masks,” recalled Allen. “In fact all of the characters on the show came from the crew.”

Camfield took a job in Denver in the 1970s, and Icky Twerp said farewell, announcing to his loyal fans that he had inherited the Lost Twerp Mine from Uncle Ickabod. With a shovel on his shoulder he walked across the station parking lot and in to the sunset, while “You’ll Never Walk Alone,” played in the background. Bill Camfield died in Fort Worth in 1991.

1 thought on “I Knew Icky Twerp”